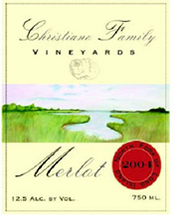 The local wine scene is dominated by some of its biggest producers, which only makes sense, I guess. I’m talking aobut places like Wolffer Estate, Lenz Winery and the Ps — Pindar, Palmer, Peconic Bay and Paumanok. Each has a wide range of wines in its portfolio, but merlot is a constant. Each makes at least two different versions each vintage, sometimes more.

Those are the big fish in the little pond that is Long Island wine country.

But there are little fish too. Every vintage, it seems, welcomes new wineries. In fact, I learned about a brand-spanking new one last night at Brooklyn Uncorked, but we’ll get to them later. Today, we’re going to talk about Christiano Family Vineyards, one of the North
Fork’s newest labels.

It’s owned by Claude and Barbara Christiano, and currently the wine is only available at the co-op Tasting Room in Peconic. Claude is
retired now, but during his career as Vice President and Assistant
Treasurer of Pfizer Inc, he traveled extensively, sampling wines from
wine regions the world over. Along the way, he learned a lot about
differences and similarities in grape growing and winemaking
techniques. He is also a founding partner in Monte De Oro Vineyards in
southern California.

In much the same way that Medolla Vineyards’ 2003 release
tells the tale of that growing season, so too does Christiano’s first
release about the 2004 vintage. 2004 was a cooler, but relatively typical year and
Christiano Family Vineyards’ 2004 Merlot ($19) shows that with an
understated nose with light black cherry, black plum and vanilla smoke
aromas. The palate is medium bodied and elegantly textured with
pleasing dark berry flavors accented by plum and just a little oak.
Soft, integrated tannins bring just barely enough structure.

All in all, it’s
an approachable, nice wine at a decent price. Drink soon. I don’t think this one will
age long term.