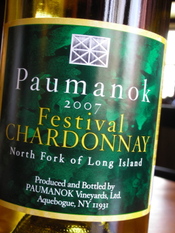 Stainless steel-fermented chardonnay is one of Long Island’s great wine pleasures. They are always affordable and refreshing, rarely offensive and sometimes absolutely delicious. In being made without oak barrels (or other oak chunks, stave, dust, etc.) these wines allow the true character of locally grown chardonnay grapes to come through.

I know that it’s hard to believe, but these wines allow you to actually taste chardonnay, not the winemaker’s manipulation of chardonnay.

We drink a lot of ‘steel chardonnay’ around our house and, as I said, they are rarely offensives. Sometimes, they do miss the mark however.

One 2007 white from Paumanok Vineyards stood out in my tasting, because it didn’t match the quality of the other wines. That wine?

Paumanok Vineyards’ 2007
Festival Chardonnay ($12). It’s a wine that I’ve enjoyed in previous vintages, but this one just didn’t do it for me. And trust me, for $12, I really really wanted to like it.

It has all of the typical citrus and apple flavors one would expect,
but the acidity is a little overwhelming — instead of crisp and refreshing, it’s a little harsh right now. There is a subtle minerally note towards the end of the short finish, but the acidity lingers too… and not in a good way.

This is still an extremely young wine, so maybe later in its lifetime it will mellow just enough to let this wine round out, but right now, it’s out of balance.