Live music every weekend. A food menu well beyond snacks. Big crowds. North Fork agritourism at its best. That’s has been Peconic Bay Winery the last several summers. Other wineries have turned to agritourism for financial stability and profitability, but few did it better than Peconic Bay.

But no more. Later this morning, the winery will announce that it is closing its tasting room to the public, moving day-to-day retail and tasting operations to Empire State Cellars at Tanger Outlet Mall. The Cutchogue tasting room will now be used exclusively for private parties and wine club events.

There will be a new area within Empire State Cellars that is dedicated to Peconic Bay Winery operations. ““The tasting bar can accommodate dozens of interested wine tasters each day and the hours of operation are much longer than they are at the winery. We’ll reach a lot more people this way,” Jim Silver, general manager of Peconic Bay Winery and Empire State Cellars, told me via email.

Office and administrative work, fermentation, bottling and storage of wine will continue at the Cutchogue location.
Why abandon agritourism at a time when nearly ever winery is at least dipping a toe in — and close its tasting room when a handful of others have opened second ones? “A great deal of money and effort is spent to move customers to a location, that is, make a portion of the 2 million visitors to the region visit you particular place.  Four years ago we welcomed five or six thousand people a year, now its more like forty thousand people.  I don’t think we could move that many by simply touting the wine more — it ends up being a constant stream of live music, events and providing a gorgeous atmosphere.  All of that erodes the margins naturally, but it also distracts from the wine itself.  What we learned from Empire State Cellars is that we could truly accomplish our financial goals and have it be about the wine.  And that seems more like a long term solution,” said Silver.

Experience tells Silver that opening the Cutchogue location only for special events will make the location more profitable as well. “The large scale events like NOFO Rock and Folk Fest and the medium scaled events — things like Johnny Winter, John Pizzarelli, the Dirtfarmers and Cider Festival — earned more for us in a day that we could in nearly a month.  They are complex to manage, but without the distraction of day-to-day operations we feel we can do a better overall job on those, and at the same time offer the location up

to our Wine Club members for their exclusive use,” he said. 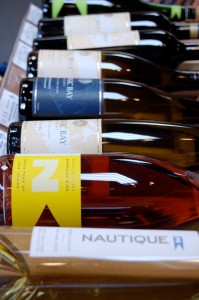 After Silver told me about his plan a few weeks ago, I’ve been thinking about what they could say about the region’s present and mean for the region’s future. Obviously several tasting rooms rely on live music and the like to attract customers.  I’ve been vocal in my belief that agritourism has the potential to erode wine quality over time. Peconic Bay’s move seems to support that — at least in part. But it also calls into question the profitability of North Fork tasting rooms in general.

Peconic Bay can close its tasting room because of Empire State Cellars. Other wineries don’t have that option. If agritourism doesn’t work — either because it costs too much to partake or because local government shuts it down — will other tasting rooms close? Maybe, but maybe not.

What is clear is that the local wine industry is still figuring out its own long-term sustainability. This is an important time in Long Island wine. A lot could change in the next three-to-five years.

The fiscal realities of Long Island wine country may mean a move back to boutique wineries — rather than weekly music festivals — and boutique wineries can only survive if they are making the absolute best wine possible.