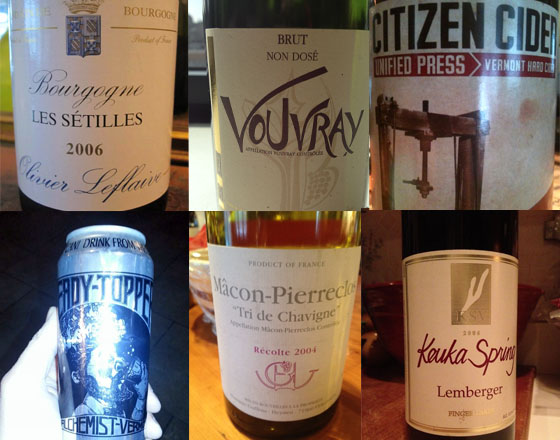 “What We Drank” makes its triumphant comeback this week with a typically diverse set of libations from many corners of the adult beverage world. Evan even found a chardonnay that he likes — quite a bit, in fact.

Lenn Thompson: Keuka Spring Vineyards 2006 Lemberger, New York
We’ve been in the new house for about a week now. I’m not going to lie and say that moving — particularly with two young kids — isn’t stressful and exhausting. It is. But it did result in at least one un-expected pleasure: uncovering a portion of my wine cellar that had toiled with little attention for several years. You know, that section of your wine cellar (if you have one) that for one reason or another, you don’t dip into often.

Well, as I unpacked my wine to put it back onto the IKEA wine racks that have served me well — even if I ended up with several leftover pieces and can’t figure out exactly how I had them configured before — I came across this Lemberger from a winery known in some circles for doing good things with the grape. I’d never had a Lemberger/Blaufrankisch with that much bottle age, so I decided to open in on a quiet night over the weekend after the kids were asleep.

Though a bit tired and lacking fruit or freshness, that peppery spice that the variety is known for was still there — in fact, it was front and center. Slinking around in the background was a minty-menthol streak that was a bit unexpected. Then again, I had no idea what to expect.

I only had the one glass and in the light of the next morning, I noticed just how old the wine looked when I poured another glass (just to sniff, I assure you), browning at the edges. I think you learn something with every glass of wine though, and it was a fun exercise, if not the most hedonistically pleasing wine of the weekend.

Evan Dawson: Guffens-Heynen 2004 Macon-Pierreclos Tri de Chavigne, France
“You must change this English thing where you say, ‘How are you doing?’ Do you really care?”

So says Jean-Marie Guffens, the Belgian lapidary who fashions memorable wines from Macon. I’ve yet to meet him, but hope to do so soon, when a friend can make the introduction safely. Jean-Marie doesn’t need writers, and he’s survived enough to not need anything, really. He makes what he makes, and who gives a damn?

Lucky for us. This ’04 is a jagged chardonnay that takes its cue from its maker: It doesn’t take the time to ask how you’re doing; it’s too busy chiseling out part of your tongue.

This is a chardonnay we’re talking about, and isn’t that nice? I’ve unfairly dissed chardonnay too broadly in the past — partly as sport, I admit — but here I am, marveling at the blazing cut of this Macon. Unlike the courtesans that parade about as White Burgundies, grabbing the highest scores, this wine could care less what you think, or how you’re doing. I happen to love it. If you don’t, well, whatever. It’ll get by just fine without you.

While a modestly priced, this wine from négociant Maison Olivier Leflaive is nonetheless an excellent example of the potential of great Chardonnays from Burgundy. And despite its modest appellation, “les Sétilles” ages beautifully, and the 2006 has both rich and lush aromas and flavors, as well as the brightness of fresh apples and herbs, as well as the minerality and acidity of a much younger wine. The wine paired perfectly with seafood and veal dishes.

Tracy Weiss: Francois Pinon NV Vouvray Brut Non Dosé, France
Oscars!! Glamour! Yelling at the television! This event calls for only one type of wine: Sparkling. Don’t overpay for Champagne on a night like this; there are plenty of tiny little bubbles from other regions to enjoy.

Our host chose a NV Francois Pinon Vouvray Brut Non Dosé. This Loire Chenin Blanc-based wine was extremely dry with a strong bead to tickle the nose and keep viewers awake for the marathon telecast. Fabulous minerals to rival the Harry Winston rocks. Strong acidity to pair with my Anne Hathaway-fueled rancor. The usual apple and brioche notes on the nose and palate, but subtle like Charlize Theron’s class white Dior. Surprising citrus as my glass warmed a bit. A bright buy for $20.

Todd Trzaskos: Citizen Cider, Unified Press, Vermont
Very psyched to see this arrive at our local farmer’s/gourmet market, now that due to a reliable source for local apples, an increase in production is allowing wider distribution. I’d had a pint with pals at the Prohibition Pig up north in Waterbury last summer, as a palate cleanser following a day at the Stowe Wine & Food Festival, then tasted their bRosé (cider and blueberries) at the Vermont Cheesemakers Festival a few weeks later, but not had not seen any since, and had been feeling the hankering.

Simple, clean and golden delicious like nose is reserved and carries none of the sour whiff that puts me off of some ciders. Juicy yet dry, lightness filled with layers of fresh apple flesh and peel astringency. Sweet fruit notes, tingly acidity, and a soft tart finish that just asks for another sip.

A description I read likening it to Vinho Verdhe, is really a good one with regard to its weight and balance. The 10 or so varieties that are included give it some complexity, while still making for a nice quaff, flexible meal pairing, and a generally pleasing profile, it is, as their motto states, “Cider for the People”. Exactly the kind of quality product that can remind us in these parts how important cider once was, how good it can be, and why there should be more of it.

Aaron Estes: Keegan Ales Hurricane Kitty, New York
I heard quite a bit about Keegan Ales when I lived in the Hudson Valley, but I never had a chance to visit Kingston specifically to try any of their beers. They are known primarily for their “Mother’s Milk” stout which has been placed on a couple of Top Ten North American Stout lists (NY Times most notably). Considering that this is not a style I generally seek out, I probably passed over the Keegan name multiple times when searching through the aisles in various beer shops around New York.

A while back, my wife, in-laws and I went to a German place called the Gunk Haus (great place…) that features local beers and traditional German fare using local ingredients. The short tap list had a couple of Keegan Ale’s beers including their IPA, “Hurricane Kitty.” The beer is named after the brewmaster’s grandmother alluding to the nickname that the police gave her because of her driving reputation.

Not too aggressive on the nose, but a nice hop balance overall. For my taste, it is right down the middle between grapefruit citrus and sticky pine. At only 5.5% ABV, this is a beer that you can definitely share and enjoy throughout the day. A nice surprise and pretty good pairing with my housemade Bratwurst and Jaegerschnitzel…

Amy Zavatto: Nero Sardo 2011 Cannonau di Sardegna, Sardinia
A friend of mine recently opened my neighborhood’s first wine shop – praise be! Not only is it walking distance from my house, it’s also stocked with such great stuff, that there’s pretty much not a single thing that I would not at the very least try (which has actually become a sort of goal).
I’ve been working my way through her stock since November and have found many things to love including this everyday red from Il Nuraghe Cantina di Mogoro, for which I’ve become repeat purchaser. This is the third bottle I’ve picked up and, for the $15 price point, exactly what I want and then some.

Cannonau is what the Sardinians call Grenache, but if that makes you think about big, somewhat jammy, tantrum-throwing, super fruity wines from southern France or Spain, then this will freak you out. In a good way. I think I have well-established on this blog that I am a sucker for great aromatics, and this one had me at hello with its pretty floral nose of rose petals and sweet herbs. In your mouth, it’s medium-light bodied but with darker fruit notes than I expected from the grape. I noticed a lot of wild blackberry, a little bit of pepperiness, and an earthy, grounding tannic structure that was easy-going and delightful enough to sip on but solid enough to hang in there with the Sunday red sauce and meatballs that were on the table last night for the in-laws. I need a bunch more of this just have on hand, although I fear it’s opening up an entire Cannonau can o’ worms. But eh, some rabbits holes you don’t mind falling into.

Mark Tichenor: The Alchemist Heady Topper IPA, Vermont
I was fortunate; a can of The Alchemist’s Heady Topper IPA fell into my lap. This is the current hype magnet of the craft beer scene, topping the ratings on review sites and generating a cult following bordering on apocalyptic.

Beers like this rarely live up to their artificially inflated reputations, but Heady Topper goes a long way toward walking the walk. Plenty of pineapple and mango flavors give an apt demonstration that ‘hop character’ and ‘bitterness’ are not synonyms. A silky texture combined with just the right amount of viscosity slid that delicious hop flavor across my tongue, only to make it vanish with a whimper, let out by yours truly, after realizing it was all gone.

Gibson Campbell: Ithaca Beer Company Cascazilla Red IPA, New York
I find red ale to be a pretty versatile style of beer. They can be a serious companion for a variety of foods and its relationship with corned beef is downright romantic.

Ithaca Beer Co.’s rendition is teeming with cascade hops setting it apart from others I’ve tried. It settles in the glass with a hazy orange-brown color, and a nice beige head with decent retention. The nose is full of spice and pine with the malt peeking its way through.

At first taste, the beer is crisp and balanced with the hop character shining through every sip. As the beer warms it becomes a completely different animal. Malt takes over on the palate with just a slight zip of hops and acidity leading to a crisp yet slightly sweet finish. It paired really well with roasted lamb leftovers and also drank nicely on its own.

featured, what we drank