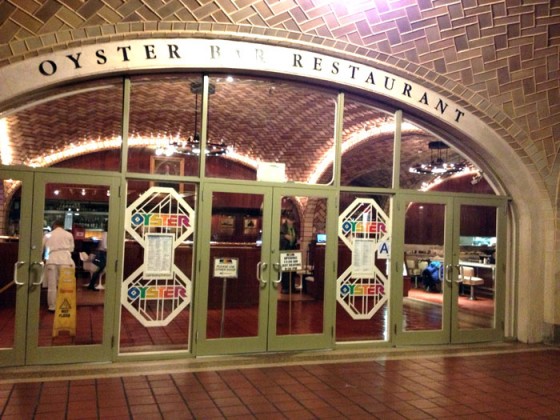 This weather cycle has not been particularly kind to those attempting to visit or live and work on the East End in 2013. The Blizzard Formally Known as Nemo shut down the LIE for days and less-than-aggressive snow clean up on residential streets made it a little hard to get around out here.

Fear not! There’s a way for Long Island wine loving concrete jungle dwellers to get a fix of something new and different from the North Fork without leaving Manhattan. Or even Midtown.

Although she doesn’t look a day over 70 and her marble staircase is as grand as ever, Grand Central Terminal turned 100 years old this month. February 1913 was not only the first time one could visit the newly completed station, but also marked the opening of a new restaurant — The Grand Central Oyster Bar. 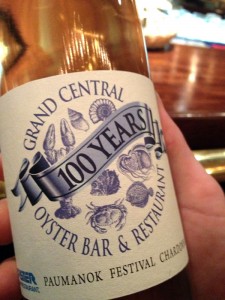 To help celebrate this momentous event, Paumanok Vineyards has bottled a commemorative wine: The “Grand Central Oyster Bar 100Years” 2012 Chardonnay. Sporting the official centennial logo on the label, this wine was fermented in stainless steel and has many properties similar to the Festival Chardonnay. The Centennial is crisp and dry with a fantastic minerality. Notes of citrus and green apple make it a perfect pair for a Pan Roast or raw Long Island Oysters the GCOB has on it’s special board on any given day.

If you think you’ll pop into the winery and grab a bottle, think again. The restaurant purchased all 56 cases produced to serve to patrons throughout the year…and I wouldn’t wait, I stopped by during the storm for a taste of the North Fork and it looked like it was selling well.

There’s no real substitute for a sunny day in June on the patio at Paumanok sucking down fresh oysters, but when you’re trapped in NYC, its worth stopping by one of Manhattan’s most iconic places to get a little bit of wine country in the city.