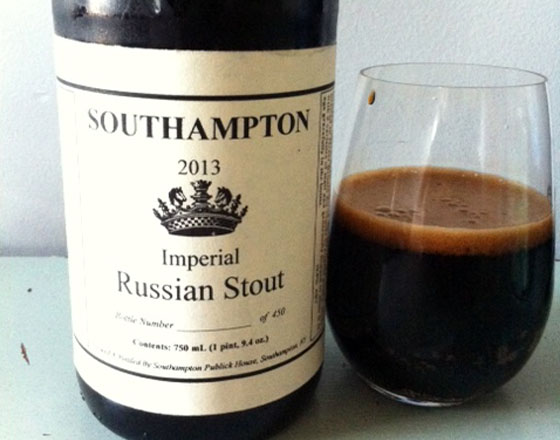 Russian Imperial Stouts, like India Pale Ales, are named after the region they were originally shipped to, rather than where they were brewed.  The flavors and alcohol content of these styles (that we have grown to love as consumers) were born out of necessity.  High alcohol and hop content act as natural preservatives in beer.  So, as demand for foreign beer grew internationally, brewers resorted to adding additional hops and fermenting to higher alcohol — ensuring that their product could be shipped across longer distances.  Made to last, IPAs and Russian Imperial Stouts are still some of the most cellar-worthy beers made today.

Southampton Publick House brews a Imperial Russian Stout every year and it has attracted a cult-like following. Its relatively small production means high demand, and few bottles left for the cellar. My bottle “aged” about two weeks before I caved and popped it open — still in its infancy.

I poured the beer into a stemless crystal wine glass which accentuates aroma. It pours a dirty motor-oil black with a dark coppery-brown head. The viscosity and weight of the beer is noticeable at first glance. The foam dissipates but never vanishes completely leaving a fine lacing on the glass.

Some dried fruit, fig and date were evident on the nose while the beer was still at a cool temperature. Once it was a bit warmer, some burnt coffee, licorice and dried straw joined in the bouquet. I expected to smell some alcohol with the high ABV of 10.5%, but it seemed to lift the aromas rather than overpower them.  I also found no apparent alcohol esters in the mouth.

Using nine different malt varieties and an abundance of hops brings about a multitude of flavors that continue to develop as the beer warms. The generous hopping isnicely balanced by a strong roasted malt character. Boasting a smooth milky texture, the stout suspends notes of espresso, toffee, and caramel.  Superfine bubbles barely tickle the tongue and allow these flavors to sing.  The hops shine through in the super-long, but not overly bitter finish.

Brewer, Evan Addario, mentioned that the hop character in the stout will fade over time, allowing the malt profile to come to the foreground. There is a moderate sweetness here that Addario believes makes this vintage different than past versions, but it’s not sweet to the point of being cloying. The complexity of the 2013 left me wanting more, and wishing I had held onto it a little longer. But hey, there’s always next year.