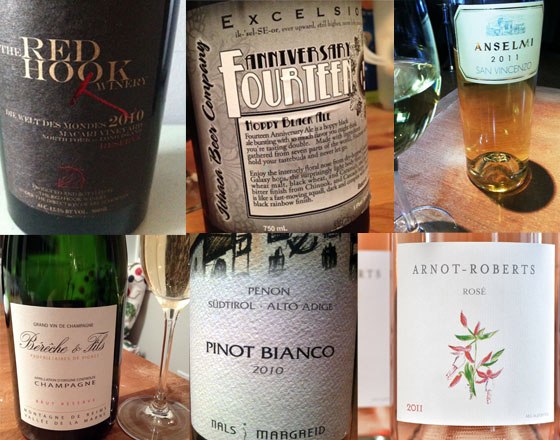 Gibson Campbell: The Red Hook Winery 2010 Die Welt Des Mondes Reserve “Macari Vineyards”
Four months after being crippled by Hurricane Sandy, The Red Hook Winery reopened its tasting room to the public on March 1. I visited the newly reopened tasting bar this weekend and picked up the 2010 Macari “Die Welt Des Mondes” Reserve which translated means A Walk on the Moon. This wine was crafted by Abe Schoener using fruit from Macari Vineyards, on the North Fork of Long Island. It is a blend of sauvignon blanc and chardonnay that was partially skin fermented and aged in neutral French oak barrels.

The wine was not quite “orange” but a deep golden color with just a hint of cloudiness. The nose carried orange peel, hazelnut and sweet cream. The front palate was mild with a luscious creamy mouthfeel. The core flavors of the wine seemed to hide until the finish. Cantaloupe, orange creamsicle and cotton candy burst out on the back end of the palate. The mild skin tannin in the wine made the finish extremely long. The tannins created a bit of heat that I liked and that gave the wine an “orange” quality.

Quite enjoyable on its own as an aperitif, but was easily overpowered with the salty Chinese food I tried to pair it with.

David Flaherty: Ithaca Excelsior! 14th Anniversary Ale
When I turned 14 years old, I burrowed into Total Recall, essentially wearing my VHS tape down to nubs—VCRs!  Wow, remember those dinosaurs that actually pulled tape, yes physical tape(!) through a set of gears!?
What I was not doing was sourcing ingredients from seven different parts of the world to brew my anniversary beer. Ithaca Brewing Company, you win this one.

Released almost a year ago, the Excelsior! 14th Anniversary Ale is an 8.1% Black IPA. Brewed with four different malts, as well as four different hop varieties (the final two, Cascade and Galaxy, being dry-hopped to impart aromas), it has matured nicely in its one year of life.

Pouring the color of root beer in the glass, its aromas begin to swell to a crescendo as it warms to meet the occasion.

Notes of coffee, chocolate, figs, caramel, cola, tangerine, stewed fruits, and blueberry pie all mingle like happy bedfellows. A full bodied, voluptuous and velvety mouthfeel sashays over the tongue. Its booziness is deceptive, as the hops keep the sensations forward in the mouth.

This is much too easy to drink, and the 750 ml bottle disappeared faster than Schwarzenegger can rip off a pair of arms.

See you at the party, Richter!

Len Dest: Roberto Anselmi 2011 San Vincenzo – Garganega, Verona Province, Veneto Italy
While I had read about this wine in Jay McInerney book “A Hedonist in the Cellar,” the first time we had it was at a Lake Garda waterside restaurant in Salo, Italy last September. Since then we have had it multiple times including this past weekend.

Roberto Anselmi has legendary status in Italian wine making. He is a charismatic, motorbike-riding rebel with an uncompromising quality-over-quantity approach that has helped redefine the image of northern Italian wines. He has pioneered white wine production in the Veneto and has garnered fame for being so intolerant of the Soave authorities’ petty rulings that he stripped his wines of the name Soave in protest. As a result, sales of his wines increased and the region lost association with one of its greatest wine makers.

Everything about this wine speaks of elegance, from the understated label to the simple gold capsule and the clear glass finish of the bottle. The wine is light straw colored with a floral aroma combined with fruit scents. This is a medium bodied dry wine with some minerality and an interesting texture not typical of a Soave. Without question this makes one rethink what they had previously thought of Soave.

The wine pairs well with many foods, the obvious choices being seafood, lighter white meat dishes and also pastas dishes.

Todd Trzaskos: Nals Margreid 2010 Pinot Bianco
Pinot blanc is one of those grapes I’d like more experience with. Aside from Alsatian wines, and some others like this one, from Alto Adige, I’m not sure where to turn next, but my mind is open.

Exceptionally tasty and cooling pairing with an eclectic comfort meal. Local farm cheese from Plymouth, VT – ( Grace Coolidge’s old homestead recipe ), sushi rice under lamb and turkey chili made with black beans, cannelini beans, roasted tomatoes, and Dad’s 2010 hot pepper mix because it does not set off the Geiger counters like the other vintages do.

Katie Myers: Arnot-Roberts 2012 Rosé
First of all, I love a lot about this winery. They’re at the forefront of the “new wave” of California wines, pioneering the unexpected for the region – but with a distinctly California flair. In this case, we’re talking about Portuguese grapes grown in cooler climates for the region.

I highly recommend buying several of these bottles. But…don’t drink them until next spring. I’ll explain.

Within about a month of each other, I partook in a bottle of 2011 A-R rose and one of 2012 (the new release, available for around $25 in stores now). Both are predominantly Touriga Nacional, although the 2012 includes 20% Tinta Cao. They’re both well-made wines. But the extra time in-bottle helps the acidity and flavors integrate more gracefully. It’s as if the wine gets a bit more comfortable in it’s skin. I’m not advocating prolonged aging, like some Bandol rosés, but a little bit of time results in a wine that sings.

For now, just admire the stunning label art (see 2011 pic for now – I neglected to snap a shot of the 2012!). To quote one of my favorite people, wine retailer Christy Frank, “your future self will thank you.”