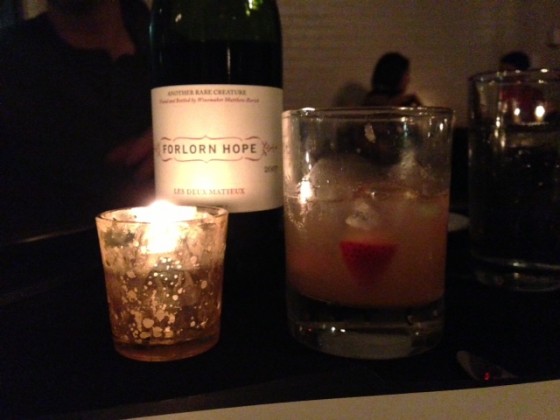 If the Internet has made everyone a critic, then most critics handing out one star on Yelp are idiots.

How many times have you had a conversation with a friend that went something like this:

“How was such-and-such restaurant?”

“Amazing. The portions were HUGE!”

We’re learning nothing about the food, the creativity of the kitchen, the thoughtfulness of the menu. But damn, that steak is 2400 calories!

How did this happen? At what point did dining out shift so heavily in favor of pigging out?

The impetus for this rant came this past weekend after my wife and I enjoyed a spectacular meal at a new Rochester restaurant. The restaurant is called The Revelry; it’s only been open for nine weeks. The Revelry’s goal is to serve creative food in a low-country style, a tribute to the background of one of the owners (and many of the straight-from-the-south employees).

The highlight of our meal was a pair of outrageously delicious smoked-duck tacos. The appetizer included two of them. Any more would have fatigued the rest of the meal. The blackened Texas red fish was a vibrant combination of flavors; the red velvet-cake “twinkie” was almost too much to bear for dessert.

And the service was simply delightful. Our waitress was extensively prepared to talk about the menu. When it came to wine, she happily deferred to their sommelier and co-owner, Jenna Miles. I had inquired about a bottle of 2007 Forlorn Hope Les Deux Matieux Petite Sirah. Forlorn Hope is a counter-cultural producer, and I wanted to get a sense of what to expect. Jenna offered to open the bottle so we could taste it, and if we didn’t think it was a good choice for the meal, she’d sell it by the glass. Turns out we loved the wine, but her offer far exceeded any basic standard of service.

We went home full, but not bloated. We were refreshed and happy. We didn’t wake up the next morning fearing the sight of food.

Then we read the Yelp reviews.

Happily, many reviews are thoughtful and positive. But there is a common thread to the one-star reviews: those reviewers wanted more food. Here’s one comment: “To me, the idea of southern food conjures images of comforting, generous dishes. Nothing like that here — just minuscule portions of ’90s-styled mediocre food.” I have no idea what “90s-styled” food is, but nothing at The Revelry screamed 90s. And again, the portions were ideally sized to allow diners to enjoy more than just one heavy main course (and I’ll bet we still put down 1200 calories or so). Another review refers to “small” portions.

Browsing Yelp reviews for other restaurants in Rochester and New York City, I found a similar thread. One reviewer posted a photo of half a dozen cheese sticks, and then asked, “What’s up with the small portions?” I don’t know; maybe one cheese stick has enough calories and fat to take down a mastodon, let alone six?

You should not be painfully stuffed when you dine out. That should not be a goal. Yes, some restaurants ask high prices for their food. Quality does not equate to quantity.

Please don’t take this to mean that it is never fair to criticize portion size. Once in a great while, portions can be so small as to be curious or silly. But if your first take is that you just didn’t have enough food, that probably says more about your eating habits than the restaurant.