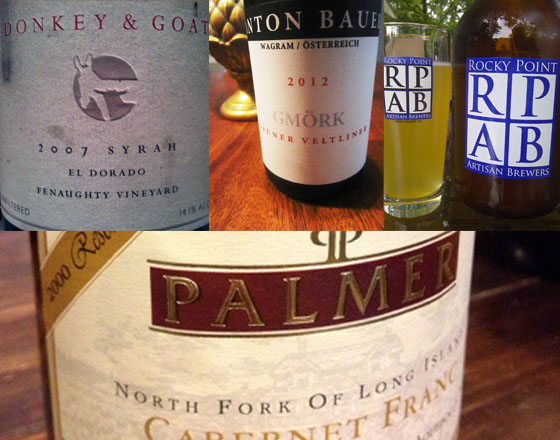 Here is a sampling of what our editors and contributors were drinking last week:

Len Dest: Anton Bauer 2012 Gmörk Vineyard Gruner Veltliner
Grüner veltliner is the signature grape of Austria and the best wines are made from the fruit from the vineyards in hills of Wagram wine region in Northeastern Austria. Located North of Vienna along the banks of the Danube the Wagram wine region is a massive plateau with south-facing terrain, named after the Wogenrain, a bank of the Danube River. The area has a generally mild climate with significant diurnal temperature swings during the growing season which contributes to the grüner veltliner grapes producing highly aromatic wines. In 2001, the leading wineries of the Wagram wine-growing area united as the “Weingüter Wagram” to cooperate in making the wines of the region better known.

Anton Bauer is a fourth-generation winemaker with a reputation for making outstanding traditional-styled Grüner Veltliner wines. The Gmörk Vineyard 100% grüner veltliner is a classic example of the Wagram style.

The wine is a bright yellow color with complex aromas of summer flowers, citrus fruit flowers and ripe apples. The flavors of this dry wine are of green apples, peppers and muted tropical fruit, with great acidity that makes this a great wine to have with meals. As this is the 2012 vintage it should develop a bit more complexity over the next few years.

This is a great grüner to drink this Summer as a sipping wine, but mostly it is best matched with dishes such as grilled sausages or chicken with potato salad, sweet corn and other garden vegetables

I consider this to be the best price value single vineyard Grüner that I have tasted. Available at Herbert & Rist Wine in Southampton

Todd Trzaskos: Donkey & Goat  2007 Fenaughty Vineyard Syrah
The solstice is just days away, with summer approaching in fits and starts of April showers and July-like heat. Any spare time I have after office work is spent therapeutically outside in the garden, vineyard or woodlot when there is sun, and then in the cellar when not.

This past weekend was a good example with the staking and thinning of vines, cutting and stacking of logs for winter, and then dodging the rain bursts to rack and blend wines. Between the wine transfer remainders and a local party where our club wines were poured, I’d not had a chance to open up anything “foreign.” So, Sunday night, with another round of showers, and a cool dampness making its way into the house, I mixed up a pot of chili, and went searching in the cellar, for a bottle that might have the fresh, yet savory qualities that would stand up to our meal simmering in the cast iron.

Eric Asimov’s recent article about Californian wines winning style points was still rolling around in my head. Given my limited experience of, and appreciation for wines coming from the left coast, I’ve felt out of touch, and know it is something I need to work on. Then my eyes fell upon a the bottles of Donkey and Goat syrah that have been waiting patiently in the racks for a few years, and I wondered… maybe I had been ahead of the curve but didn’t know it?

I originally found the Donkey & Goat during a search to see, if in the growing segment of organic, biodynamic and natural wines, any viticulturists were looking at the work of Masanobu Fukuoka. I first read his work over twenty years ago, and it left a long lasting impression…as did this syrah.

Smells of concentrated blueberry and pomegranate glaze slathered on a great haunch of bison, roasting in a field of violets. While the palate does show the fruit and meatiness that the nose foretold, the flavors were cast within a much more complex textural and energetic experience. Bracing freshness attacks the lingual perimeter and a fine tingly film varnishes the center. That coating expands into a persistent and mouthwatering drought brought on by dusty clouds of blue tannin. Showing remarkable youth and impressive resistance to time, I believe this wine’s most interesting phases still lie ahead…if you have some.

Rocky Point Artisan Brewers made a splash last summer with this delicious summer sipper. This beer is just coming in to season. It’s the beer of summer for me more than likely.  I will make sure I have some after spending the day on the beach — or maybe enjoying it while at the beach.  You will catch me bringing this to backyard grilling and if you stop by, you may find some in your glass. Now, if only the boys can get this into cans, it will make the world a much better place.

It pours a beautiful cloudy golden hue. An unfiltered hefe, that packs a delicious flavor profile. Yeasty and citrusy; mouth filling with great carbonation and attractive lacing. It most defiantly quenches your thirst.

Melissa and I finished off this growler in about 2 hours during a long day of yard work, humping bags of mulch and pea gravel.  We finished the growler before the work was done.

I promise next week, nothing about Rocky Point.

But now we can say that we love the top tier of New York cabernet franc, whether it’s Finger Lakes or Long Island. The Long Island renderings tend to be richer, more baritone than tenor. But it’s all relative, as this Wolffer 2010 Cabernet Franc reminds us: You can’t take the acidity out of these wines, and while you can adorn the wine in oak, you can’t take away the cabernet Franc character. The Wolffer is a very, very strong wine. It’s given an ounce too much wood for my taste, but it’s delicious and broad and filled with the kind of cab franc push-and-pull: tart fruit and sweet fruit, earth and spice.

The Pallus is a wonderful mainstream effort. It’s affordable (around $20) and a nice handshake into the world of Loire reds. Oh, and in case you’re wondering: It’s Brett-free. Anyway, cabernet franc deserves more than the usual “not bad for a cab franc” status. This is not meant to be cabernet sauvignon, and thank goodness. You can find an ocean of bad cabernet sauvignon. Cabernet franc is David Foster Wallace in a world dominated by Dan Brown.

Last week I had the pleasure of attending a 30th anniversary party at Palmer Vineyards. I arrived late and after a splash of winemaker Miguel Martin’s delicious 2012 rose, I dove into some library wines Miguel had opened. First there was a 1993 Pinot Noir, from magnum, that was certainly a surprise — not fresh by any means, but not tired either. There was a series of merlots from the mid-to-late 1990s. The 1995 was beautiful and still had some primary fruit up front.

Ultimately, as a cab franc fanatic, this 2000 Reserve Cabernet Franc was the wine that I went back to for a second half-glass. 2000 is one of those underrated vintages — 2001 overshadows it in the mind of many — but if I had tasted this wine blind, I would have guessed that it was several years younger.

With ripe blackberry and cherry flavors, understated oak and hints of herbs and loamy earth — this is what gets me so excited about Long Island cabernet franc — and is why I have several bottles of various local cab franc tucked into my cellar for at least a few years of aging. The complexity that this wine shows, while still tasting fresh because of its acidity, gets me every time with older cab franc. I could drink it every day.