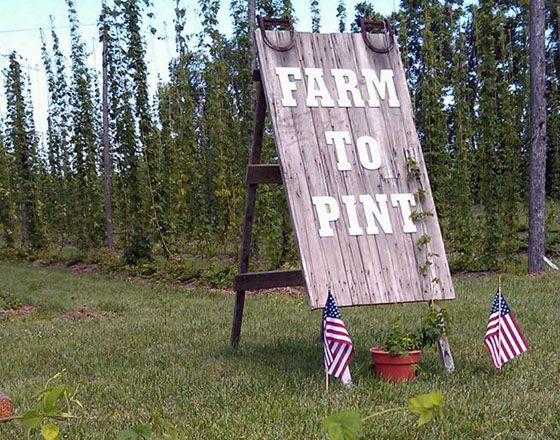 Last weekend I realized how lucky I am. I was raised, and live, in a small farming community. The farms and people that call the North Fork of Long Island home are a huge part of my life. My life is actually dependent on it. Most of the food and drink that I consume on a daily basis flies past my window as I drive down route 48 to the farm winery where I’m employed. I owe everything I have to these farms.

This realization came after a weekend of visiting the bustling wineries that draw millions of tourists to our region each year. tMy passion for local agriculture, aquaculture, and viticulture are evident in my fridge and belly.  That’s why I made it a point to stop by Farm To Pint to meet the people responsible for the two-year-old hop bines literally shooting up towards the sky. Jaclyn Van Bourgendien (pictured right) and Andrew Tralka are that couple, and they’ve planted an acre of Humulus Lupulus (or what we call hops) right on main road in Cutchogue, NY. If you’ve driven past their farm you might have noticed the 30-foot beams that support their budding plants.

The “honk if you’re hoppy” sign gets some horns blowing, and the skepticism of passers-by has veered towards an acute interest over the past two years. I could burst into a history of hop farming in New York State where 90% of all domestic hops were once cultivated, but I won’t. What’s really important is the one-acre farm where Andrew and Jaclyn are doing what they love, and growing what they want. 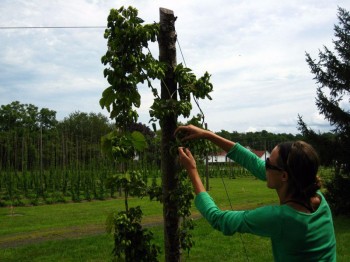 Farm to Pint’s mission is to provide local breweries with local ingredients. This seems like a pretty simple concept.  Why not use what’s grown here to brew “local” craft beer? And what better place to do it than the bucolic North Fork — surrounded by a burgeoning craft beer movement and plenty of serious producers. Andrew explained his philosophy to me amidst a field of Chinook, Cascade, Tettnang, Centennial, and Northern Brewer plants.

Standing there on the farm, it all makes sense. It all sounds almost easy —  but hop farming certainly presents some challenges. Farm to Pint’s foray into growing local hops is much akin to the pioneers of grape-growing here back in the mid 1970s. Disease pressure, variety selection, and farming methods are constantly evolving as the farmer learns by trial and error. Andrew explained this learning curve to me — how the Japanese Beetles have wreaked havoc on some of the plants and how his Northern Brewer variety never really flourished in this environment. All of these factors will dictate what will be planted in the future, and how they will be tended to.

Andrew and Jaclyn said that their centennial hops are some of the best candidates for propagation. They tend to have a higher yield per plant relative to other varieties and are extremely popular with local brewers. When I was there, the centennial hops were a week away from harvest.  The small conical flowers of the female hop plant contain resins that are extremely important in beer production. They serve as a natural preservative, while adding bitterness to the palate, and pine-like aromas to the nose of the beer.

The air was laden with the distinct centennial hop aroma as Jaclyn broke open a mature cone to reveal the yellow-green resin. She explained how the riper cones can be handpicked earlier than the bulk of the crop that won’t be mature until early fall. The first hand-picked batch of this season will be used by Long Island Spirits in their single-malt “Pine Barrens Whiskey” mash. A number of breweries have used their first crop to brew in 2012 and local newcomers Moustache Brewing Co plan to use some in the near future. Andrew mentioned that if necessary, they would work with John Condzella of Condzella Hops who recently acquired a mechanical hop harvester that will make hand harvest look painstakingly slow. Condzella raised over $30,000 to purchase the machine through a kickstarter campaign this past spring.

If you’re a homebrewer that wants to take it to the next level, Farm To Pint has put together a grow-your-own hop plant kit. Ten bucks gets you started with your choice of hop, stake, and instruction kit. These are available at the farm and certain retail outlets that are updated on their Facebook page.

I asked Andrew what his hopes were with regards to local breweries using his hops.  “I’d love to see more wet hopped beers out here,” he said. Wet hopping is when hops are added fresh, as opposed to dried or pelletized like most hops available to brewers. He went on to explain that this can only be done in areas where you can get the hops fresh (basically overnight) before they start to dry out or develop mold. “Breweries like Sierra Nevada have done wet-hopped beers for years and it’s finally possible to do it here.”

This isn’t a jab to breweries not using local hops as there just aren’t enough grown here….yet.

I relished the opportunity to see these plants flourishing, stinking, and blowing in the breeze. Hops are something I’ve ingested for years, used in my own homebrew, and yet, had never seen alive. This is what drove me to write this piece, and is what excites me for the future of farmers here and around the state. Kudos to Andrew and Jaclyn for bringing another crop to our little farming town.