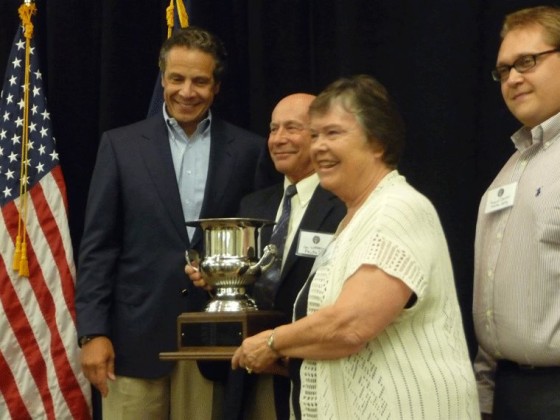 Keuka Spring Vineyards won the coveted Governor’s Cup when their 2012 Riesling was selected as the top wine entered in the 2013 Wine & Food Classic. The competition was held at the Watkins Glen Harbor Hotel. A total of 875 wines were entered this year, and although some of the state’s top wineries choose not to submit their wines for this event, the top wine is always a significant prize. Judges from around the world come to evaluate the wines (and ciders and spirits).

“We got a call from the New York Wine and Grape Foundation at 12:30pm,” wrote August Deimel, Keuka Spring’s winemaker. “By 6:30pm we were on a stage with Governor Andrew Cuomo, accepting the Governor’s Cup. Maybe the best day of my professional life.” You can read NYCR’s recent profile of Deimel here.
Owners Len and Judy Wiltberger joined Deimel and the governor onstage to accept the trophy. Each year the top wine sells out quickly; Keuka Spring will almost certainly have a surge of interest in the 2012 Riesling.

The Classic competition always offer industry professionals the chance to air their views on a number of controversial topics, and this year is no different. Seth Olney, owner of The Olney Place on Keuka Lake, had strong words after the trophy presentation. Olney’s business is a combination breakfast/lunch/grocery/utility store, and it’s only a few miles south of Keuka Spring Vineyards.

“The fact that I can’t sell (Keuka Spring) wine is utterly absurd,” Olney said. “The governor joked, ‘The more they make, the more we make!’ Sorry Governor Cuomo, but it’s the more they SELL the more we make. The fact that I can offer a beer from Belgium in my store but not the Governor’s Cup winner from four miles up the road — with almost the same alcohol by volume — is so ridiculous it’s laughable.”

That prompted a response from Ted Marks, owner of Atwater Estate Vineyards on Seneca Lake, who agreed: “It is a stupid rule and an example why New York ranks as the 30th worst state for wine consumers. We sure are in a fun business.”

Despite the limitations on where wine can be sold, the Keuka Spring 2012 Riesling won’t have trouble selling out, if history is a guide. It’s a big moment for the Wiltberger family, who have been outgoing owners for decades.