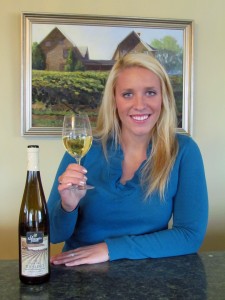 Meaghan Frank, daughter of current president Fred Frank, granddaughter of Willy Frank and great granddaughter of founder Dr. Konstantin Frank, joins the Dr. Frank Vinifera Wine Cellars team this week following in the footsteps of her family predecessors. Fresh off a flight from Australia and having just finished her Masters of Wine Business from the University of Adelaide, Frank is wasting no time in getting to know the family business.

It might come as a surprise to some, but Meaghan has not always been on this path. As an undergrad communications major with an interest in sociology she was on track to enter a PhD program in communications research.

When Frank took a wine appreciation class at Cornell that she realized how comfortable she was with the subject. When the instructor mentioned her great grandfather in class, she realized for the first time how important a role her family played in the region’s wine industry and, in turn, how lucky she was. This ignited her interest in wine and set her on a path that included the aforementioned time in Australia pursuing a degree in wine business as well as working at a winery in the Adelaide Hills and a role in wine promotions.

Frank believes her new role will be very dynamic and evolving and will likely include closely working with her father, expanding distribution and sales to new markets and increasing presence in existing markets, developing wine tourism as well as serving as a brand ambassador promoting Dr. Frank. Frank has even taken a few winemaking classes, not in an effort to become a winemaker, but to better understand the process and in turn the overall winery operations.

Meaghan believes that in addition to developing the Dr. Frank brand it is equally important to advocate for the Finger Lakes as whole. “I’d really like to promote the community spirit in the Finger Lakes and really work together with other produces to elevate the region to what it deserves to be. I think there is so much potential here and the wines are growing in quality and consistency and it’s a very exciting time” said Frank.

It’s clear that Meaghan has developed a passion for wine and the wine business that one would expect from her family name. Her father, Fred Frank, is equally excited about her arrival. “Each generation of the Frank family has contributed to the winery’s growth and I am sure Meaghan will add her expertise to bring the winery further success,” said Fred. It is now up to these two latest generations to carry the torch lit by Dr. Konstantin Frank years ago.