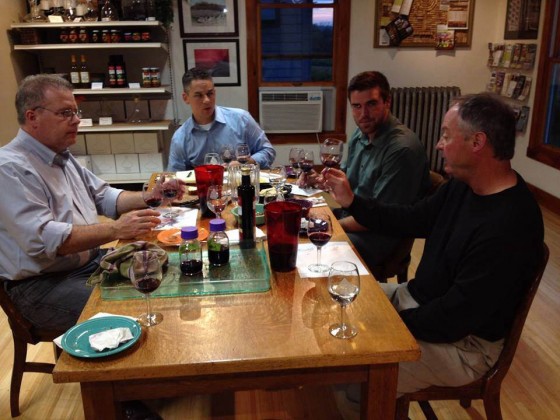 Covering the Niagara and Lake Erie Regions the past few months has allowed me to meet many of the local winemakers. While I’ve been a wine lover, as well as a novice winemaker, for many years I’m just now learning many of the fundamental phases of a vintage in a commercial setting.

At the end of September, I was invited to assemblage at Arrowhead Spring Vineyards in Lockport, New York. Assemblage is the French term for blending wines and the term used by Duncan and Robin Ross to describe their process at ASV.

Joining me at the session were Ryan Little, winemaking assistant of Arrowhead Spring Vineyards, and John Hailey, certified sommelier and wine specialist at Opici Wine Company. Since Arrowhead Spring is a client of Opici they have invited John Hailey to offer his expertise to aid in this process each year.

I quickly realized that this experience will establish a great foundation for me as a wine writer and blogger. 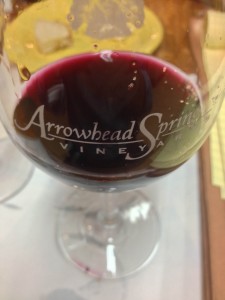 We focused solely on Arrowhead’s red varieties. We tasted samples of merlot, cabernet franc and cabernet sauvignon from more than 30 barrels in the winery’s cellar. The purpose was to discern the flavor profiles of the wine in each barrel, identify which could be bottled as standalone varietal wines and which could be blended to make Arrowhead Red or Meritage Reserve (both Bordeaux-style red blends), for the 2011 vintage.

While I’ve tasted many different wines, this was my first experience tasting samples from that many barrels at one winery during one visit. As a newcomer to the process, it was interesting to see the level of thought and attention to detail that goes into blending. Since we were all being treated as equals regardless of our backgrounds I was very curious to see how Arrowhead would use our tasting notes.

We started with tastings of merlot from four different barrels. The merlot, not surprisingly, tasted very young and was quite tannic. You could still get the ripe currant and plum through the tannins on the nose and palate. There was also a faint note of eucalyptus on the nose in the samples from half the barrels. One of the four barrels (Barrel 390) had the potential to be bottled by itself. Barrel 390 is a Radoux Eastern European oak barrel put into service in 2008. The merlot in that barrel had softer tannins than the rest and was more fruit forward.

The cabernet sauvignon, tasted from 14 barrels, was the star of the evening. There were several candidates for single varietal production, as well as many well suited for the Arrowhead Red and Meritage Reserve according to the Rosses. The cabernet showed big, red jammy fruit on the nose, along with vanilla notes present in many samples. The fruit wasn’t as powerful as a cabernet sauvignon from California, but was more reminiscent of the way it is produced in Bordeaux.

2011 proved to be a good year for cabernet in Niagara. It was a “pleasant” summer in Niagara, according to the Rosses, unlike much of downstate New York. There were many hot, sunny days that lead to a good crop. While there were six weeks of rain, those weeks were followed up by six without rain. Notably, most of New York and the East Coast were affected by a hurricane in October, 2011 which hurt the harvest for many grape growers and wineries. The rains from the hurricane stopped shy of hitting Niagara, which allowed the 2011 vintage to be better there than in much of the rest of the state. The Rosses feel the subtleties evident from Bordeaux varietals grown in cool climates were on display with this vintage, especially the cabernet sauvignon.

Unfortunately, there were samples from six barrels that showed the presence of trichloroanisole (TCA) and were tainted to the point of being unusable by Arrowhead Spring Vineyards. The wine tainted with TCA smelled musty and faintly like a damp cloth. The tainted barrels needed to be removed from the cellar before the TCA spread any further.

We ended the evening with a surprise early tasting of the 2012 Syrah. The 2012 Syrah was picked at 24 brix and demonstrated black cherries and spice on the nose. The pepper notes of a good Syrah were present and were quite strong. The wine was still somewhat effervescent as it was at the tail end of malolactic fermentation. The toast of the oak barrels was quite perceptible as well, but it was clear that the building blocks were present for a high quality vintage.

After the tasting notes were gathered, Robin and Duncan subsequently put together several formulations of the blends that will become Arrowhead Red and Meritage Reserve. They will go through several formulations, each time playing with the proportions of merlot, cabernet sauvignon and cabernet franc, until the blend satisfies their palates and is worthy of bottling.

As a novice witnessing the process on the commercial level, it was a great learning experience. As wine geek, it was interesting to see how professionals use this skill to bring forth a final product worthy of the winery’s name. I hope to experience it again next year to see how the process varies from year to year based on the vintage.