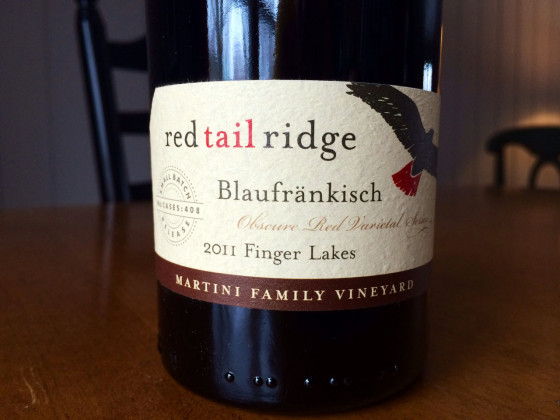 It’s extremely rare to find wines that taste exactly the same year-to-year in New York State. And that’s okay. Vintage variation is just part of the package. Not tasting the same isn’t the same as wines not being delicious every year. Winemakers on the East Coast understand what they need to do in cooler years versus the warmer ones. Harvest decisions change. Winery decisions change too.

Red Tail Ridge makes some of the best blaufrankisch in New York — and not just in warmer years like 2010 (that was a great wine, though). Though in different ways, I liked the cooler-season 2009 just as much. There was a freshness and a femininity that year that was charming and supremely food friendly.

That style is sort of what I expected with the Red Tail Ridge Winery 2011 “Martini Family Vineyard” Blaufrankisch ($23). It didn’t quite live up to that standard, though.

All of the bright red cherry and cranberry aromas and flavors are there, but woody, toasted coconut and vanilla notes overwhelm them.

Medium bodied and juicy, the palate shows a bit of cinnamon and black pepper to go along with the crunch red fruits — but again stemmy, oaky notes take over and turn a bit bitter on the finish.