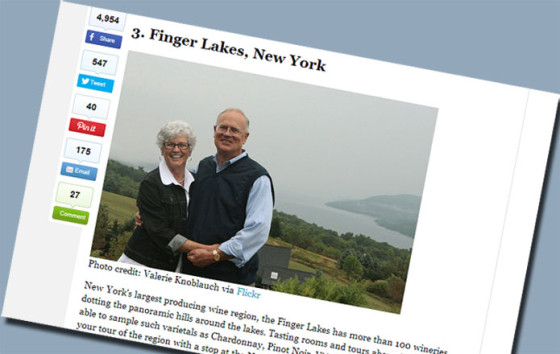 The Finger Lakes is not the third-best wine destination in the world. And this should not offend anyone in the Finger Lakes. It should offend the nice people at the Huffington Post, or Viator, or wherever this list originated.

For the past several days, I’ve seen a long list of people on social media celebrating this ostensible award. Several people posted the list on my Facebook timeline, declaring it another signal of the world’s respect for the Finger Lakes.

And on that score, I guess, maybe, sure. But there’s actually a danger here.

But let me be specific.

This is a horrible list for a number of reasons. Start with the lack of explanation for how the list was created. Best values? Most accessible? Most beautiful? Best wines? This list is a hodgepodge, at best.

The writing is erratic and, unfortunately, indicates that the writer doesn’t know much about wine. We don’t celebrate regions because they produce 60 varieties of grapes; we wonder why they’re struggling to pare that list down.

Allow me to also ask who decided to use the worst possible photo images for each region? Mendoza should sue. The Finger Lakes looks like a scene out of a Sir Arthur Conan Doyle novel. Willamette is filled with, one might conclude, wonderful pavement. Bordeaux is noted for requiring three people to fix faulty barriques.

The point is, the Finger Lakes doesn’t need this. It’s hackish, and overplaying the spot on the list looks desperate, not confident. And I know that many, many wonderful Finger Lakes professionals and fans have been pointing to this list. They’re doing so out of love and admiration. They mean well. In the world of any publicity being good publicity, who can blame them?

But just as the Finger Lakes didn’t need to convince wine drinkers that its reds were better than California (a refrain that is misguided in approach and happily retired), neither does the region need to over-boast a spot on a questionable list. I’ve been to

If you’re fortunate enough to live near in the Finger Lakes, you’re in the midst of something special. But it’s no longer a surprise that the region is a strong tourism destination. I hope the region will grow wise enough to know which praise is meaningful, and which is clickbait.

But hey, they got me, too. I clicked.