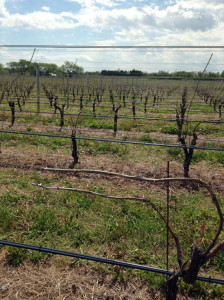 This past winter was a rough one across much of the northeast, with lots of snow and some of the coldest temperatures in recent years. As my colleague Evan Dawson wrote last month, those temperatures will have a not-insignificant impact on the Finger Lakes wine industry.

On Long Island, the damage wasn’t nearly as severe or widespread, but with bud break’s arrival, Long Island growers can now better assess what damage was sustained, if any.

Elevation matters, even here where many Long Island are seemingly flat. Little rises and dips matter because the coldest air pools in those low areas — and that’s often where the most damage occurs.

Earlier this week, Raphael winemaker Anthony Nappa shared the picture at right from one of the vineyard’s sauvignon blanc blocks. “It’s a low spot. Now we have bud break we can see (the damage). We do have some secondaries (buds) pushing a bit,” he said.

Upon further examination, he estimates that up to an acre of sauvignon blanc vines may have been killed and other vines nearby may have bud loss or crop loss. “Only time will tell.”

Alice Wise from the Cornell Cooperative Extension of Suffolk County told me in an email “I’m not surprised to hear that there is some damage in low spots. We examined buds in January and the only place where we saw damage at that point was a few low areas. Growers know these areas are at greater risk for damage both from winter injury and spring frost.”

Long-time grower Richie Pisacano, who grows grapes on the North Fork at his own Roanoke Vineyards as well as in the Hamptons at Wolffer Estate where he has served as vineyard manager since 1997, hasn’t seen any damage in his own vineyard, but has noticed some at Wolffer. That damage is in an area where he almost expects it.

“I have a low area at Wolffer that gets dinged in most years with either winter damage or frost. It’s less than an acre and will likely have greater than 50% crop loss. Other than that, we’re enjoying a pretty robust bud break,” he said.

Elevation isn’t the only contributing factor. Grape variety matters too. Nappa told me “Sauvignon blanc isn’t so cold hardy. We have riesling right next to it and its fine.”

Nearly every grower contacted for this story was quick to put things into perspective — any damage suffered is minor compared to what it could have been. Wise probably put it best, saying “Frankly, I’m thankful that vineyards look as good as they do right now. Our region fared better than many others in the east.”