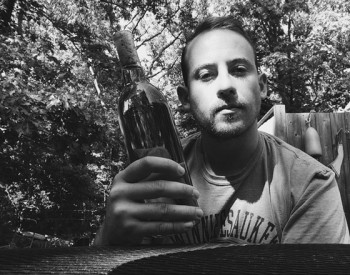 If you’ve been to the North Fork recently and stopped in at Jamesport Vineyards chances are you likely saw Conor Harrigan behind the counter. Harrigan, who works in the tasting room at Jamesport, has been serving thirsty winery goers and educating them on the exclusively estate grown portfolio for the past year.

Harrigan has been working in the industry since 2009 and has held varying roles in retail and at a few prominent North Fork wineries. This week, the New York Cork Report sits down with Harrigan in our “5 Questions With…” series.

What was the first bottle of wine you remember drinking — and where did you have it and who were you with?
The first bottle of wine I ever imbibed was a steel fermented chardonnay from Peconic Bay Vineyards. The day was July 4th, 2009. I was on the cusp of turning 22, about to enter my final semester of college, and I was working my first wine job at the time: Greenport Wines and Spirits. I had helped Deborah and Greg Gove open their store. At work that day, Greg handed me that chardonnay he made. Later on that evening, I was playing ultimate frisbee with a bunch of my friends. The temperature was hovering around 85-90 degrees, so I was working up an appetite for something cool. I had the steel fermented chardonnay sitting in a cooler with ice, and, unfortunately, no one wanted to drink it with me. Faced with this prospect, I drank it myself. We all know how rapidly light, crisp whites can go down the gullet when ice cold. It was gone in 30 minutes. The next 24 hours of my life were filled with a queasy hellishness that I did not soon forget.

When did you know that you wanted to be in the wine industry?
After working at the wine shop, I was in need of some more work, so I stopped by a bunch of wineries, none of which were looking to hire at the time. It became frustrating after about two hours. I was waiting to turn out of Osprey’s Dominion, thinking to myself that I would go home. After a second, looking left, I decided to try my hand at one last winery. I turned left, pulled into Duck Walk Vineyards, and pulled out with a job. I started without training on a busy Saturday in late May, and just started to pick it all up as I went along. I developed more of an appreciation for wine, and began meeting people in the industry, trying their wines, too. That first summer was fun, and that was when I realized the wine industry was something worth considering as a long term thing.

What do you wish were different about the New York wine community and industry?
I can only speak to Long Island. There are many questions that float around the community here: Should limos be welcomed, or should tasting rooms prohibit them altogether? Is there an area of compromise? Will we see a rise in private, reservation-only tasting rooms? Is a tasting room better off financially with reservation-only tastings? Since some winemakers work for multiple institutions, is sameness becoming an issue?

Then there is a discussion of ethos: What, precisely, constitutes “manipulation” of wine? What exactly is “minimal intervention”? If acidulation is manipulative, is racking? Where do we draw the line? I’d like to see more definitive conclusions and definitions on the ethos of winemaking.

When you’re not drinking your own wines, what are you drinking?
Recently found a wine from southern Rhone called “Cercius” which I really enjoy. Graziano Vineyards out in Mendocino County shows that truly exceptional winemaking should not have to come at exceptional cost, seeing that even his ten dollar reds receive two years in the barrel. Edmeades makes wonderful zinfandels out in Mendocino. Monte Degli Angeli in Piemonte makes wonderful Pinot Noirs at twelve dollars. I’ve been developing more of a love for bubbly lately, and I find that Roederer Estate makes some great bubbles. Sparkling Pointe has been my jam, lately. I tried Benmarl from the Hudson Valley recently and enjoyed it quite a bit. Sella and Mosca make great cannonau and carignano in Sardegna. I love finding producers who can bring balance, clarity, and pretty good quality to the table at a good price. However, I do enjoy some higher-end producers such as Ceretto out in Piemonte. Finally, as per Long Island: Russell Hearn’s ’13 Lieb Rose is something I’ve been enjoying a lot. Great wine. Edward Lovaas’ 2013 Sauvignon Blanc is another local favorite.

If you could only pick one grape/wine/producer to live out your days with on a deserted island, what would it be?
Hands down: Graziano Family of Wines. As I mentioned before, even their ten-dollar reds get two years in the barrel. Passion in the truest sense of the word. He specializes in great varieties such as zinfandel, arneis, negroamaro, cortese, aglianico, and carignane.