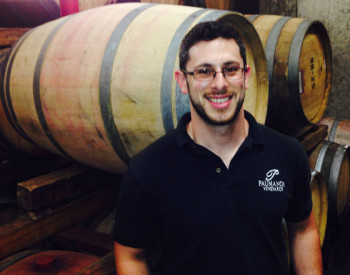 If you’ve taken the drive out Route 25 on the North Fork east of Riverheard and stopped in at Paumanok Vineyards in the last 8 months,  you’ve likely met Anthony Quattrone. A self-described jack-of-all-trades Quattrone spends most of his time in Paumanok’s tasting room pouring for, educating and giving tours to all those who stop by the vineyard. But, as many in the industry do, Quattrone wears multiple hats and also manages fulfillment of wholesale accounts, works in the cellar and assists with harvest for Paumanok.

A Long Island native, Anthony is originally from Coram, NY and after moving around he has returned to the town where he was raised. Like many, Quattrone’s first foray into the workforce was in the corporate world where for five years he worked in human resources and marketing. It was his decision to pursue a new wine passion that led him to a part-time summer tasting room position at Laurel Lake Vineyards last year and not long after his heart steered him to a full-time commitment when he found his current position at Paumanok.

The next time you are driving on route 25 in the North Fork be sure to stop in at Paumanok Vineyards to say hi, talk wine and taste through Paumanok’s current offerings with Anthony.

What was the first bottle of wine you remember drinking — and where did you have it and who were you with?
Wine has always been a large part of my family’s culture. With every family gathering at my grandmother’s Bay Avenue house in Patchogue, there was always some kind of red or white wine on the table as all the cousins, aunts, and uncles sat down to dinner. My first taste of wine was most likely in this setting with a sip of cabernet sauvignon, possibly Mondavi.

However, in March of 2009 during a weekend stay in Greenport with a girlfriend, I experienced a bit of a turning point. At dinner, I paired some Long Island pinot noir with a steak au poivre. After a glass each from Laurel Lake and Castello di Borghese, I found my approach to food and wine changing. I started to appreciate wine for more than just a beverage to have with a meal — it was something to enhance the food I ate.

When did you know that you wanted to be in the wine industry?
I can’t say there was any specific moment that caused me to gravitate towards the industry. It was a series of different experiences, and making new friends, that led me to my current role. I spent about five years in the corporate world. During that time, I reconnected with a college friend who introduced me to the craft beer movement on Long Island. I became involved with a group called Long Island Beer & Malt Enthusiasts and learned how to brew my own beer and make cider. The art of fermentation quickly became a passion and compelled me to learn the “ins and outs” of production in the beverage industry.

Through the good fortune of having great friends, I took on that job at Laurel Lake Vineyard in May of 2013. That summer changed my life and it didn’t take long for me to fall in love with the atmosphere and culture of working at a vineyard. For the first time, going to work was something I truly loved. A few months later, I parted ways with the corporate world and was referred to Paumanok Vineyard soon after. And, even with all the craziness that comes along with working in a tasting room, this is only the beginning for me.

What do you wish were different about the New York wine community and industry?
I think for any growing region, change is inevitable. There are plenty of burning issues that arise when a region/ vineyard receive more attention and traffic. More specifically, how do we want our region/ vineyard to be portrayed in the public eye and what experience are we looking to provide? There are many schools of thought on how to run an individual business. But, I believe as long as the players involved work together towards a common goal and continue to focus on the quality of the product and the experience our customers receive, we’ll be in good shape.

When you’re not drinking your own wines, what are you drinking?
I try not to limit myself but I tend to lean more toward reds –pinot noir, Rioja or Bordeaux. But you can always count on there being some kind of brew in my glass. Whether it’s an ale or lager hailing from an American, German, or Belgian Brewery; a local gem from some of Long Island’s finest or a home brewed concoction, nothing finishes a day of pouring wine better than having a great beer in your hand. Bourbon, scotch, and whiskey are nice too.

If you could only pick one grape/wine/producer to live out your days with on a deserted island, what would it be?
It may come as no surprise, but as a current mentor recently shared with me, “When in doubt, chenin blanc.” I cannot think of a better island wine to live out my days. Though, no specific producer I might add. But, I do have a favorite!