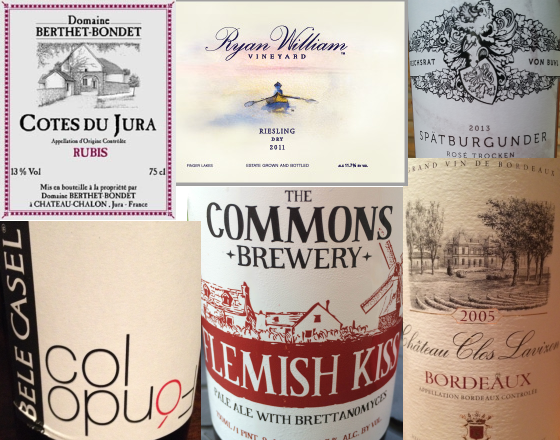 Lenn Thompson, Executive Editor: The Commons Brewery, Flemish Kiss
Among all of my beer-loving friends, I have two guys that I always absolutely geek-out with when we get together. We always try to pick up new beers that we haven’t had, explore styles that we know we like and occasionally try something that we don’t really expect to like.

Over the weekend, I got together with one of these friend and we tasted a bunch of stuff but mostly farmhouse styles and Brett-influenced beers. Of the two Brett beers, the one was harsh, searingly dry and too much about the Brett and not enough about anything else.

Then we got to this beer from Portland’s The Commons Brewery. It put our palates right back where we wanted them — actually enjoying the beer. It’s described as a pale ale with Brett, and that’s exactly what you get. At first it tastes like a lot of American pale ales — fruity with some hop character, but then it turns a bit Belgian and then the Brett character peeks through, adding a layer of complexity and interest without overwhelming what is a very good beer to begin with.

I like Brett more in beer than I do in wine, but in either beverage, it has to be one component and not the whole story. This beer nails that balance.

Todd Trzaskos Contributing Editor: Chateau Clos Lavizon 2005 Bordeaux
I’m in this phase where I’m being super tight with the wine budget because of other demands on the purse, but have some aging bottles that need to come upstairs and provide some service. This helps us to to tread water in the cellar depth until empty space can be turned back into wine.

Upon research, I found this wine is no longer in the portfolio of my candidate for “everyday wine hero”, importer Monsieur Touton. Simple and direct red overtones with a hint of black currant both on the nose and palate. Light and balanced at 12.5% ABV, it had a place at the table but was not a demanding guest. Barrel character shows just a bit but provides a functional scaffold for the fruit. Fine pairing for chicken thighs simmered with dried provencal herbs in just rendered fat of smoked duck breast, along side spring parsnips and shallots and a fresh green salad.

This wine was a negociant project if I remember correctly…last bottle from a case I bought on a budget spree after trying it at a trade tasting. Knowing that the vintage was a really sound one, and hard for anyone to make bad wine, this was a good daily table investment. Not a lot of info out there, but I’ve seen it scored in the 82-88 point range on the scale for those who care to use it as an indicator. My lips told me that it was simply good wine. Nothing wrong with a B grade student that performs reliably and consistently. In the age of modern wine making ( where flaws are more rare and bad wine is often really poor balance ) I think it makes really good sense , to buy a case, if you find a good inexpensive bottle, that has decent character and structure. You get your discount and you can try the wine over an extended period of time. It’s worth the taste for good drinking and if cracked four, six, twelve months apart at a time it’s definitely worth it for the education.

Lindsay Prichard, Finger Lakes Correspondent: Ryan William 2011 Dry Riesling
Even with more than one hundred wineries within about an hour’s drive, it’s easy to find yourself visiting the same places when hitting the Finger Lakes wine trail. So I try to make a conscious effort to visit new wineries (and try new wines) whenever we go tasting in the Finger Lakes. For me, it’s the best way to discover some of the region’s hidden gems.

One of the wineries that I recently visited for the first time was Ryan William Vineyard in Hector, NY on eastern side of Seneca Lake. The winery is small and relatively new, and their no-frills approach makes it clear that they are they are serious about making quality wines rather than being a party spot for weekend wine warriors. The winery currently offers seven wines including Dry Riesling, Chardonnay, Gewurztraminer, Cabernet France, Merlot and two Late Harvest wines. We tried several of their wines, but brought home the 2011 Dry Riesling.

The 2011 Dry Riesling is a great example of the diversity that can be found across riesling varietal wines. While there are plenty of Finger Lakes riesling that fall onto the “sweet” end of the IRF Taste Profile, the 2011 Ryan William was clean, crisp and exceptionally dry. Petrol notes were undeniable alongside Granny Smith apples , lemon drop and hints of ripe kiwi. We drank the wine by itself rather than with a meal, but there was enough acidity to suggest that it is a food-friendly wine with good pairing potential.

Michael Gorton, Jr. Long Island Correspondent: Reichsrat Von Buhl 2013 Spätburgunder Trocken Rosé
I’ve been told that it’s rosé season.  I don’t drink a lot of rose simply because my wife is not a fan of the style.  She often thinks, what’s the point unless you are intending to make and grow grapes for rosé.  I tend to agree with her on that point.  Every so often I find a rose that satisfies us, and others.  This rosé did just that.

This pinot noir, a ‘Spätburgunder’ from the Pfalz region of German was a delightful sensory wine. Bone dry with sweet red berries lead the way with hints of pinot noir earthy notes.  Fresh and electric on the palate it brought some fresh cut watermelon and some more fleshy ripe red berries. The palate lingered with some fresh herbs and more ripe red berries.

If you are an acid hound, this will satisfy your needs. It’s under screw cap, so this is the perfect wine for the beach. At about $16, it over delivers.  This will be with me the next time I go to the beach or get together with friends for a Friday night full of family fun.

Katie Pizzuto, Art Director: Monte Xanic’s 2013 Chenin Blanc
I just got back from Mexico, so more tequila, mescal, Cuban rum and beer went in my system than wine, but I took the time to buy a bottle of one of my favorite Mexican whites…Monte Xanic’s 2013 Chenin Blanc, made in Baja, which has a climate very similar to the mediterranean. I sipped it alongside some serrano ham and manchego cheese, and the light honey notes were the perfect match for the food.

Not incredibly complex, but after all, there are moments when you just want to enjoy a wine rather than contemplate it.

Paul Zorovich, Finger Lake Correspondent: Domaine Berthet-Bondet Rubis 2012 Cotes du Jura
On a visit to the in-laws, we all went on a field trip to a big wine store nearby. Since my father-in-law had a gift certificate, we all “helped” choose wines for him. My wife and I chose a bunch of French and Italian wines that we hadn’t had before, as well as an interesting Macedonian red that may show up in a future WWD report.

Oddly, the back of this wine’s label calls this blend of Trousseau, Poulsard, and Pinot Noir a “rose”, but really it’s a very nice light summer red that took a slight chill completely in stride. Paired with broiled chicken out on the deck with friends, it was fruity and rich with flavors of plums, raspberries, and a little strawberry too. A bargain at around $22, it got 90 points from Wine Enthusiast (if you’re into that sort of thing).

Tracy Weiss, NYC/Long Island Correspondent: Asolo Colfòndo Bele Casel Prosecco Superiore
Prosecco, known to neophytes as the ‘stuff squealing girls use to make mimosas with at brunch’ has upped its game in the United States. Bele Casel (from the Veneto, Treviso specifically) is my go-to producer for sparkling Italiano that is not laden with sugar resulting in insta-hangover. Recently, they’ve started in import their Colfòndo. It’s an unfiltered wine giving you yeasty lees sediment realness from the 20-day fermentation.

They suggest you decant, but I’m a bigger fan of turning the bottle upside down to enjoy the cloudy effect. Much like how you see the world if you drink too much of the bottle(s). Yeasty. (Duh.) More frizzante than the full round beads you might expect. Incredibly dry and a minerality that rolls around your mouth. Pink lady Apples. Skip the flute in exchange for a wider glass. Even better, late night from a porrón.