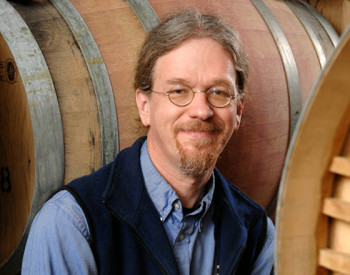 The New York Cork Report is back in the Finger Lakes for the latest edition of our “5 Questions With…” series. Our latest victim, David Breeden, Winemaker at Sheldrake Point Vineyards on Cayuga Lake.

David is a Michigan native who grew up in suburban Detroit before moving to California for his high school years. His route to the Finger Lakes was an indirect one; Iowa, back to California and Illinois all in the pursuit of higher education wherein he has obtained multiple degrees in both chemistry and philosophy.

It wasn’t until Breeden moved to Ithaca that he realized that a career as a winemaker was even possible for individuals other than vineyard owners. As an employee of Cornell at the time David started by taking a wine science class and soon after landed an intern position at King Ferry Winery. Breeden continued his wine education at Cornell and King Ferry over the course of the next four years and in 2002 joined Sheldrake as assistant winemaker where he has remained since.

David has built a career in wine over the last 16 years, but he fell in love with the region for much more. Breeden is very passionate for all that the Finger Lakes has to offer including the local thriving cider, craft beer and artisan cheese industries. For this and many other reasons, David believes that the Finger Lakes is currently one of the most exciting culinary regions in the country.

What was the first bottle of wine you remember drinking — and where did you have it and who were you with?
This is the toughest of the questions for me. I honestly do not remember. My parents generally had wine with dinner, but I don’t remember them ever sharing it with us kids (there were 6 of us). My first memory of wine, besides at communion in church, would have been when I was 10. My parents, older sister and I were visiting friends of my parents. Their daughter who was 17 took care of my sister and I while both sets of parents went off to do fun things. She, the daughter, liked “Blue Nun,” and I remember her giving us a sip of that. Maybe that set me on my path to riesling.

When did you know that you wanted to be in the wine industry?
After I moved here in 1997 to accompany my partner who had a job at Cornell. I was in the process of writing my dissertation and finishing my graduate work in philosophy and chemistry. To make ends meet, I got a chemistry job at Cornell while trying to write. After a while I realized that it was beautiful here. I really wanted to stay, but didn’t want to be an assistant in someone else’s lab. It was difficult to get a philosophy professor job in the area, so I needed to find something else. I had a background in plant chemistry and an interest in wine (and a degree from UC Davis, though not in wine), so I wrote to Thomas Henick-Kling, who was head of enology at Cornell, and asked him how to get into the wine industry. He gave me good advice, and here I am!

What do you wish were different about the New York wine community and industry?
The industry here is pretty great. I love the sense of community we have, that we are all working together to make the best wine we can so that the region stands out. I love the fact that we feel free to call each other up to borrow a cup of yeast or ask each other technical questions. That said, there are two things I would LOVE to see change: 1. Increased diversity. It is still pretty much a sea of white boys out here, though there are certainly way more women then there were when I started, though still pretty much all white, and 2. Increased professionalization with the concomitant increased realization that really, winemaking is a real job and needs to be compensated as such. Again, salaries are way better than they when I started, but there is still a lack of the sort of benefits that usually come with a “real” job (e.g., good health insurance, retirement plans, etc). My hope is that we can get that increased professionalization without losing the sense of community that, I think, is part of our being a young wine region.

When you’re not drinking your own wines, what are you drinking?
BEER! There are a lot of good local breweries in the Finger Lakes (e.g., Bacchus Brewing, Ithaca Brewing, Two Goats, Southern Tier, etc). There’s also a double IPA from Firestone Walker Brewing out in Paso Robles, California called “Double Jack” that is truly amazing, and I love that.

If you could only pick one grape/wine/producer to live out your days with on a deserted island, what would it be?
I’m going with “grape,” and I would have to go with riesling. You can make such a wide range of wines from it that it would have to be my choice.