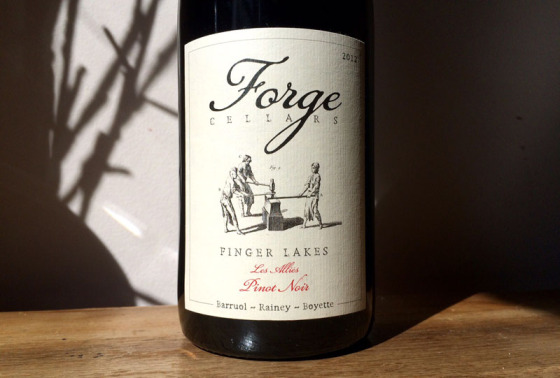 When Forge Cellars burst onto the Finger Lakes wine scene with the 2011 vintage, it was with plenty of noise and fanfare. A famous French winemaker will do that for any New York wine project. The label’s first release — an oak-aged riesling — has inspired several other Finger Lakes winemakers to try it.

But for all of the attention the Forge riesling garners, there are plenty of outstandingly delicious rieslings in the Finger Lakes, in a variety of styles. The Forge wines that have captured my attention most are the pinot noirs — in part because there simply aren’t many potentially profound pinots in the region.

After tasting Forge Cellars 2012 “Les Allies” Pinot Noir ($32) over the course of a few days last week, it’s clear that Louis Barruol, Rick Rainey and Justin Boyette — the trio behind Forge Cellars — are on their way to making Finger Lakes pinot noir that is as piercingly expressive as it is delicious.

This isn’t a wine to pop, pour and gulp down. It changed significantly over the course of a few hours in my glass and on the counter. Enjoy it with food and without. Swirl it and nudge it a bit. Coax it to open up. It will reward you.

Just-opened, its decidedly toasty — edging on oaky — but with time, those qualities take a step back and turn more earthy — think dried autumn leaves — accenting a core of concentrated black cherry with cinnamon spice and vanilla notes in the background. The interplay of cherry and spice is almost cola-like but ultimately shows more as complexity than confection.

The medium-bodied palate undergoes a similar evolution with more air, starting with toasted vanilla notes before moving into dark cherries sprinkled with Chinese five spice and a ribbon of red raspberry. The finish is long, fresh and framed by dusty, lightly grippy tannins.

I won’t predict how long it will evolve and improve in your cellar, but know this — I’ve hidden a few bottles in my own cellar. I hope I forget about them for at least a few years.