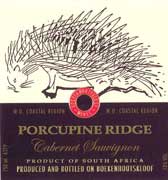 When Jeanne of CookSister emailed me about hosting Wine Blogging Wednesday, I’ll admit I didn’t know much about her. Given her choice of themes, I quickly learned that she’s a South African living in the U.K. — and after reading her site I was hooked on her blend of knowledge, adventure and good humor.

Her theme, South African Reds, takes us all back to her homeland.

My entree in WBW #6 is 2000 Porcupine Ridge Cabernet Sauvignon from Boekenhoutskloof Estates. Boekenhoutskloof is a fairly well-known winery in the Franschhoek region of South Africa. Porcupine Ridge is actually winemaker Mark Kent’s second label. Given the wineries full name, I can see why they went with something a bit easier to pronounce and remeber.

South Africa has been a wine-producting region for much longer than I realized, over 350 years. Before this wine, most of the bottles I’d tried from S.A. have either been oddly funky Pinotage or simple, but tasty whites made from Chenin Blanc and called "Steen."

For WBW, I was determined to try something new and something different…that’s the point after all isn’t it?

So, when confronted with mostly Pinotage and the Rhone-style Goats do Roam…I picked up this bottle.

Eyes: This wine is medium cherry-brick red with the look of an aged red wine…that subltle browness at the edges.

Tongue: Much the same as the nose, there’s some currant and cedar…and maybe a little mineral? I don’t have a ton of experience with wines that are past their prime, but I think this one might be. It tastes a bit oxidized to me…but not overly so.

Overall: Definitely unlike any Cabernet I’ve tasted before and plenty interesting enough that I’d drink it again. As I researched the wine a bit, I found that some of the newer vintages are available and cost $20 or more (one is on www.wine.com). And some of the Syrah by this same producer seems quite popular.