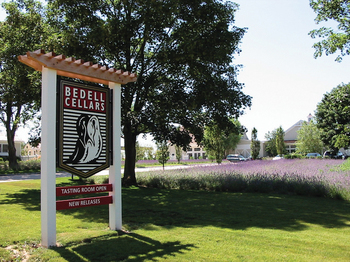 Michael Lynne, owner of Bedell Cellars in Cutchogue and Corey Creek Vineyards in Southold, wants to be the best. But not just the best on the North Fork or even in the U.S.

He wants to be the best in the world.

Marty, a globally respected winemaker who was integral in the creation
of the ultra-premium Opus One brand, has received most of the press
since the announcement, but Levenberg may have a more immediate impact
on the wines. While Marty will only be visiting Long Island
periodically (he lives in Chile), Levenberg will be involved daily.

In addition to posts at Paul Hobbs and other Napa wineries, Levenberg
has worked in Bordeaux and New Zealand, bringing an interesting mix of
Old and New World experience with him. He also brings an understanding
of “how to make wine in a cool climate” as a result of his experience
in Bordeaux, said Bedell.

With his new winemaking team complete and in place, Lynne may have
positioned Bedell Cellars to bring a top-100 wine to Long Island, but
how soon can it happen?

“Perhaps as soon as two to three years from now. We can absolutely make top wines here,” said Bedell.

If you don’t want to wait that long to enjoy a delicious bottle from Bedell Cellars, try the 2001 Merlot Reserve.
In April, the vineyard will release 455 numbered magnums of this
reserve, which will feature labels designed by noted artist and Sag
Harbor resident Eric Fischl.

These special, collector-worthy bottles will sell for $200. For those
on a smaller budget, 750ml bottles without the Fischl label will go for
around $30 – a nice value.

Regardless of bottle size or label, this is a spectacular wine that
captures the essence of what Long Island wines can be. Bedell notes
that 2001 had a “long, warm growing season with little or no rain at
harvest.” This reserve was made using fruit harvested on October 31,
2001, from Bedell’s “best blocs of Merlot.”

Ninety-five percent Merlot with three percent Cabernet Sauvignon and
two percent Cabernet Franc, the wine itself is extremely elegant and
reminiscent of a fine Bordeaux. On the nose, I was greeted with cedar,
spiced berries and delicate hints of sweet vanilla. On the palate,
black and red cherry flavors mingled with minerals and more spice.

With fourteen months in French-coopered American oak (sixty-five
percent new), this wine offers super-smooth, expertly integrated
tannins and a mesmerizing, long finish. This is the best Bedell wine
I’ve ever tasted, and I’ve tasted all seventeen years of the vineyard’s
Merlot.