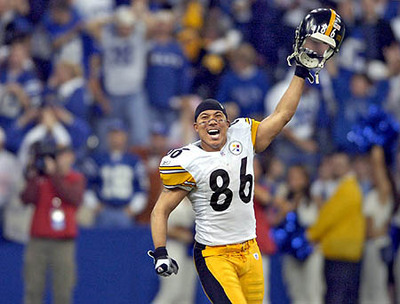 This post has absolutely nothing to do with food or wine — at least not directly — but I’ve been far too silent as my beloved Steelers march on in the NFL playoffs.

Heading into the playoffs, I was luke-warmly confident, despite my often blind faith in the black and gold. We had a great year (yes, I always speak as if I’m on the team) but there were some missteps along the way…and there are some damn good teams in the AFC.

But, after watching them demoralize the Cincy Bungles (sorry Jens, and that wasn’t a dirty hit) and then go into Indy and win despite the officiating crew’s best efforts, I have no doubt that we can win it all this year.

I probably won’t surprise any of you to learn that we’re hosting a little party for the game…ten people or so…even if only four of us are Steelers fans. The others are very jealous Jets fans…who openly admit that they sucked this year. And one Eagles fan who had to endure quite a year.

Lord knows I’ve watched enough Yankees playoff games with this group while my Pittsburgh Pirates occupy the basement…it’s their turn.

Anyway, there won’t be any wine reviews coming out of this shindig. Pittsburgh-made Iron City Beer and I.C. Light will be the beverages of choice most likely. But, there is talk of an assortment of homemade pizzas and maybe some ‘burgh food like kielbasa and pierogies.

So, Sunday night I’ll either be riding the high of all highs…or drowning my sorrows.