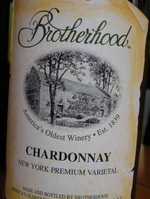 I’ve written a few times about Brotherhood Winery in Washingtonville, NY up in the Hudson River Valley. It is one of the region’s larger producers and makes a wide array of wines–from honey wine to spiced holiday wine to riesling to a ruby ‘port’.

They don’t have any vineyard holdings of their own, so they source grapes from throughout New York State–primarily the Finger Lakes and Long Island.

The grapes that went into this 2004 chardonnay were grown on Long Island’s East End, but no further details are available. There’s a lot of chardonnay grown here, so it certainly isn’t a surprise that some of it is leaving the island.

Of winemaker Baeza’s current releases, this $13 chardonnay is the best. It’s nicely balanced with vanilla, honey, pineapple and butter-roasted apple on the nose. Unfortunately, those many layers don’t carry over to the palate, which is fairly one dimensional.

The balance is nice though and this is be a serviceable, gulpable chardonnay if you like oak-derived flavors but don’t like flabby.