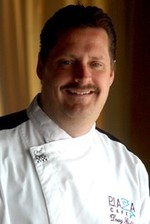 I first met Doug Gulija at a chardonnay vertical tasting at Wolffer Estate a couple years ago. He came right up and introduced himself to me and throughout the tasting, I was impressed by his palate as well as his dedication to Long Island wines–both in his personal life and and at his restaurant.

You may remember that when LENNDEVOURS was celebrating it’s 3rd birthday a little over a month ago I mentioned that I wanted to work with some local chefs on some special food and wine pairings that bring together the best of Long Island’s seasonal ingredients with local wines. We’ll call it our "Local With Local" project.

Well, I’m happy to say that Chef Gulija has agreed to sign on as my chef of the month for May. He is chef and proprietor of the award-winning restaurant The Plaza Café, located in Southampton, New York. The Plaza Cafe is known as a premier destination for seafood lovers and has been awarded three stars (Excellent) by the New York Times. The Plaza Café has also been awarded an Award of Excellence by the Wine Spectator in 2001.

Over the course of his career, Chef Gulija has cooked over seas at The Grand Vefour in Paris, the InterContintental Hotel in his homeland of Croatia as well as studying abroad in Spain and Japan.

Later this month, chef and I will announce our wine pairing of the month.