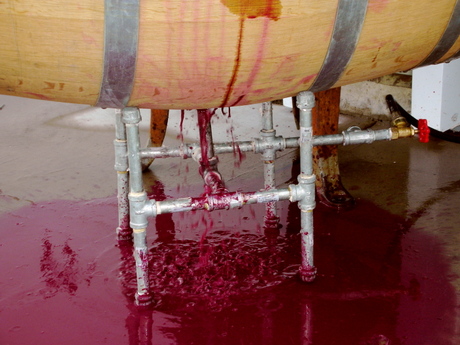 Last Saturday, I stood in a large, barely-heated garage-turned-winery just off of Alvah’s Lane in Cutchogue. The thermometer had crept just above freezing, so I could I barely feel my hands. That’s the bad news.

The good news is that I got my first taste of the wine that my group and I are making at Sannino Bella Vita Vineyard, sipping a barrel sample of 2007 cabernet franc, made from fruit grown on vines just at the end of the driveway behind me.

There are several places where you can taste and learn about wine on the North Fork — from winery tasting rooms to my friends’ education center, Grand Cru Classes, all just up the road in Mattituck — but no one offers such a comprehensive, hands-on wine education as Lisa and Anthony Sannino.

Membership at Sannino is $3,500 per year and includes everything you
need to make a full barrel of red wine from the grapes growing right
outside this garage. From that one barrel, you’ll end up with 23 cases
of wine, which is 275 bottles. That’s a lot of wine, but you can get a
group of friends together and buy a group membership, which really adds
to the fun.

On this frigid Saturday morning, I was thrilled not only to taste
some of ‘our’ wine, but I also got to meet many long-time LENNDEVOURS
readers for the first time, including Andrew, Jeff and Mark. Great
meeting you guys. And Chris, of course, good seeing you again too my friend.

Membership really starts in the fall, when you go out into the
vineyard and harvest the grapes that you’ll then crush, de-stem and
inoculate with the yeast that will turn them into wine. I missed that first meeting of the LENNDEVOURS group, but I’ve heard that it was fun.

Never made wine
before? Don’t worry, Anthony has been making wine at home for over a
decade and he’ll guide you every step of the way. Juan Eduardo
Micieli-Martinez, winemaker at Martha Clara Vineyards, also serves as a
winemaking consultant for your barrel. The picture at right is Juan talking about cleaning out barrels during the racking process.

Throughout the year, as your wine is truly born and evolves,
you’ll be invited out to the winery to take part in the necessary work
— both in the winery and in the vineyard. Like I said, I missed the harvest and
pruning sessions, but didn’t want to miss the first tasting.

That’s why I got up early (after a late night drinking beer at DEKS) on a chilly Saturday… it was time to taste
the wines in barrel and also rack them — the process of siphoning the
wine from its sediment and putting it into another vessel.

The wines we tasted, which will eventually be used to create
each member’s or group’s custom blend, are all from the 2007 vintage.
The small lot of cabernet franc stood out for me with great fruit and subtle
spice components that were surprisingly evident in such a super-young
wine. Another favorite is a merlot fermented with a Barolo yeast strain
and aged in new French oak. It showed great ripeness and some spicy,
smoky and vanilla notes.

I wasn’t sure what to expect, but came away very impressed with
the wines. In a few months, we’ll be working on our blends and then
we’ll bottle the wines in the fall, before harvest begins the cycle all
over again.

The Sanninos are building a new barn that will serve as the
winery starting with the 2008 vintage. They are accepting applications
for 2008 memberships. I can’t speak for other members of the LENNDEVOURS group, but I sure hope to do it again next year.