Ravines Wine Cellars has closed on a deal to acquire the White Springs production facility, along with 42 acres of vineyards at the Geneva site. The deal includes an additional 19 acres not under vine. 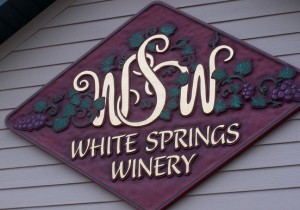 “We’ll have different purposes at the two tasting rooms,” Hallgren explained. “We expect that the Keuka Lake tasting room will get the most traffic. We’ll continue to hold some events there. At the Geneva tasting room, we’ll be able to offer vineyard tours and production facility tours. We want our customers to see the process, because we put so much emphasis on excellent grape growing and production.”

White Springs will continue to operate the tasting room on Route 14, but some winery and facility staff will now work for Ravines.

The tipping point of the deal appears to be the 42 acres of vineyard. Hallgren is known to be very particular about where he sources his fruit. He called the White Springs Farm site “deceiving.”

“It looks flatter from the top,” he said, “but from the production facility, you see there is significant slope.” That has been a significant factor in grape ripening. Last year, during a tumultuous vintage that saw bursts of heavy rain close to harvest, Hallgren said the White Springs Farm site produced cabernet franc at 23 brix, harvested in early November. “That was just one more impressive moment when I knew this site would pass the test,” he said.

Our first impression is that riesling, chardonnay, sauvignon blanc and gewurztraminer will stand out.”

But there will be changes in the vineyard. Hallgren plans to get rid of the corot noir planted at White Springs, along with the pinot gris. He will remove at least some of the valvin muscat, but has been surprised at the interest other wineries have in purchasing those grapes.

“With its proximity to the extension of the Niagara escarpment, it sits on calcareous soil with pH values between 7 and 8,” Hallgren said. “Our first impression is that riesling, chardonnay, sauvignon blanc and gewurztraminer will stand out.”

Hallgren will act as General Manager for the White Springs brand for the time being. As such, he has already begun to scale back some of the wines offered by White Springs.

“This will have tremendous implications for Ravines Wine Cellars,” Hallgren told the New York Cork Report. “It will give us the one state-of-the-art winemaking facility in the Finger Lakes region. This, in turn, will allow us to continue making wines without compromises.” For example, a larger press will allow Hallgren to continue whole-cluster pressing of white grapes.

Hallgren could not disclose all of the details of the acquisition, but said that he was in discussions with Fribolin for many months and came to deeply appreciate the facility. His goal was to make sure Ravines could maintain access to the facility without taking ownership of the White Springs brand. Had Fribolin found a buyer willing to pay the inital asking price of $5 million, Hallgren would have lost access and been without a home to make Ravines wine. It’s safe to assume that Hallgren negotiated a much lower price, given the fact that Ravines will not acquire the White Springs brand.

“Carl is a class act,” Hallgren said. “He made this happen. He more or less selected us for this opportunity. There is synergy here.”

In 2011, Ravines Wine Cellars produced 11,000 cases of wine. Hallgren said this acquisition will allow Ravines to “slowly increase” that number, but he does not have a goal of a large increase in case production. Some of the grapes on the 42 acres will be used by White Springs, and some will be sold.