The Cornell Cooperative Extension cold-hardy cultivar trial vineyard in Willsboro, NY, on the western shore of Lake Champlain, sits in a place of true natural beauty, and is home to a number of grape varieties that have been bred for disease resistance, and tolerance of extreme cold to points well below -25F.  Willsboro is also my own home stomping ground, which is where reporting on this place becomes admittedly a bit challenging.  Objectivity is obscured by my associations with the place, which are as long and deep as the lake itself.

I was dipped in Willsboro Bay for the first time when I was only a month old, and have enjoyed its waters every summer since then.  There is a certain magic to the thin spit of land that juts out into the widest part of the lake.  The peninsula of Willsboro Point encloses the deep bay at the only place where Adirondack cliffs meet Champlain waves.  It sits between two iconic eastern mountain ranges, at the tectonic seam between two ancient land masses, was once an inland sea, and has been an avian migration flyway for eons. 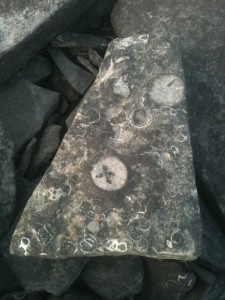 Limestone and dolomite crust left by prehistoric marine sediment is riddled with primordial fossils (as seen at left) all along its shore.  The base rock is covered by a mix of glacial till called Bombay and lake deposit clay.  This surface soil provides a well balanced drainage and water retaining medium for the for the vines that have taken root there, and entwined themselves around my own.

When the trial vineyard was installed on Willsboro Point in 2005, I was actually too shy to approach it at first.  It was a surreal apparition; the manifestation of a vision I had when I was just a boy, on that I did not fully understand at the time.  Maybe it was overactive childhood imagination, maybe foresight…but I’d had an experience that conjured an image of vines on this land, overlooking the eastern view shed of  the big lake and Vermont’s Green Mountains in the distance.
You see, in 1976 we took a week-long family trip to Niagara falls just before the Bicentennial Independence holiday.  Along the way my parents stopped in the Finger Lakes to taste and buy some wine, possibly to cope with the long drive across New York — with three boys, aged 7, 5, and 2 in the back seat. 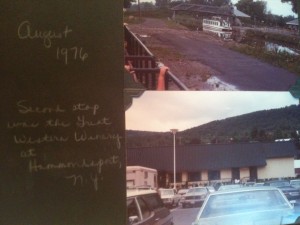 I still clearly remember looking over a vineyard, out over a lake (likely Keuka), to a shore a few miles away and wondering why we did not have vineyards in Willsboro, where the land and line of sight seemed so strikingly similar.  The cold answer to that question became apparent in adulthood, as I began training my palate, understanding the role that climate plays in wine growing regions, and accepting the foregone conclusion that our northern valley was not one of those places.

Seeing the vineyard appear back home was a revelation.  I started reading about cold-hardy grapes, their breeding history, the challenges of chilly viticulture, and the resultant wine being made in unlikely places all around world. It was another two years before I got up the courage to introduce myself, attend a workshop, and begin availing myself of the resources and educational opportunities afforded by the Cornell Cooperative Extension (CCE).  I then realized that what was happening was no dream.  That premonition of trellises above the Lake Champlain shore is a reality, and for the last few years, I have been making amateur wine from the fruits produced there.

Twenty-five varieties — four panels of each, three vines to a panel — are randomly distributed around a plot two-thirds of an acre in size.  The original mission of the project was to determine which of the vines might survive in this northerly exposed location, and to weed out those which would not, with an eye towards choosing fruit most appropriate for commercial wine production.  The litany of varieties, when recited, can perplex even the hardened sommelier. There is Frontenac, Geneva Red, LaCrescent, LaCrosse, Leon Millot, Louise Swenson, Marachel Foch, Marquette, Petite Amie, Prairie Star,  Sabrevois, St. Croix, St. Pepin, Vignoles…

To the chagrin of some data collectors, all of the vines have done quite well.  Low mortality and winter-kill levels have been partly attributed to the relatively forgiving winters that we have seen in recent years.  The far lower limits of the vines resistance to cold  has still not really been tested, but to be honest, it is hard to wish for weather so cold that Siberian huskies take notice…even if it is for science, and wine.While severe winter weather has not yet served up a serious threat, the site does still deal with the normal pressures that a vineyard should expect, and this is where the human effort comes in.We are not the only local fauna interested in what is growing there. A high box wire fence successfully deters the deer herd that passes from the Adirondack foothills to the shore through the farm.  Raccoons have consistently managed to find a way under the fencing, and so this year there has been successful improvement to the low slung electric fence intended to fend off the masked marauders.  I can vouch for its effectiveness, as I inadvertently tested it while taking some of these photos, and was much more careful afterwards.  The anti-aircraft netting goes on as soon as there are the first signs of late summer predation.

Our forensic team has found in the past that chipmunks prefer to open berries, steal the seeds for storage, and leave fruit flesh to fester in the bird mesh.  We are still not sure what the best and most humane way is to deal with the small rodents, but I have suggested that the vineyard build a small hut, and host summer camp for a few cats from the local SPCA. 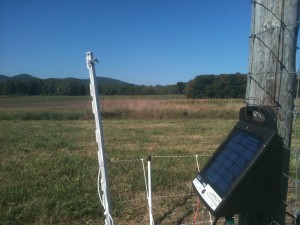 Disease pressure is the other factor that the vines must endure, despite the fact that natural resistance is an aspect of their breeding.

Certainly weather dependent, the mildews and rots are happiest in the cooler, wetter years, while summers like this bone dry 2012 season, diminish the threat levels considerably.  This part of Willsboro Point sits 180 feet above the lake surface, and enjoys remarkable air passage and drainage, which means that circulation within the canopy, is quite good.  A minimal conventional spray program is employed, under an Integrated Pest Management regime, and has consistently kept the vineyard in an impressively clean state.

In 2009, which was a cloudy, damp, short season, Cornell’s Plant Pathologist Wayne Wilcox made a visit to assess the state of disease damage, and was in effect, disappointed, because compared to other locations “there was nothing to see.”   I would advocate that excellent siting, fastidious viticulture by enthusiastic caretakers, and the genius of the vine varieties themselves represent not only a short term success, but also shine sunlight on a growing segment of the wine making future.

The late August fruit sample chemistry results for the trial vineyard were posted at Cornell’s NY Grape Management Update Blog just before the Labor Day holiday, and that was my cue to clear the schedule and get the crushpad ready.
The harvest weekends at the Baker farm are busy ones.  By the time the  picking is complete, and the wine work is done, the weather has usually turned.  That Brix report was also my reminder to get in one more good swim.