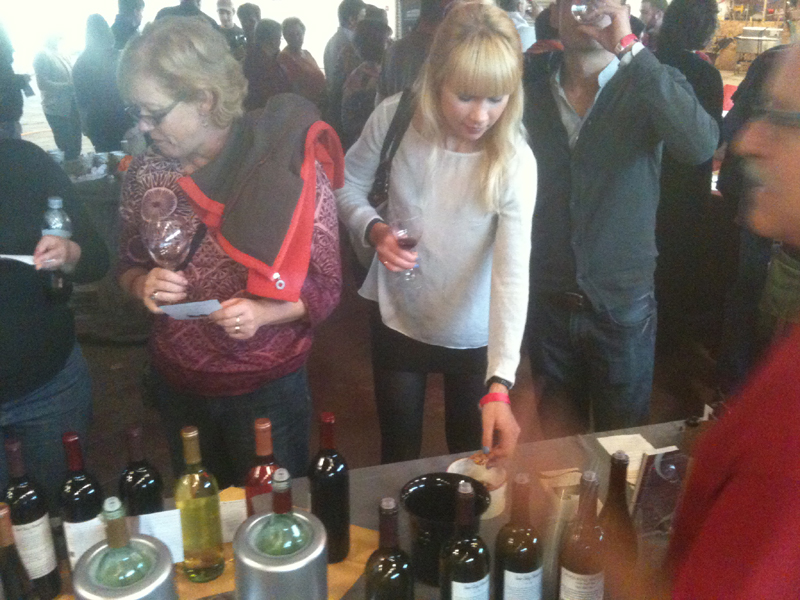 Columbus Day weekend welcomed the first incarnation of the Adirondack Coast Wine, Cider & Food Festival to The Crete Civic Center in Plattsburg, NY.  A small but well designed showing by local vendors of fermented beverages, foods, and handmade crafts was met by a much larger and very enthusiastic North Country crowd of the curious.

Foul weather helped to drive folks inside for the event, after a growing season that was drier and warmer than most on record. Apples suffered in some places due to late spring frosts, but for grapes that survived the nip, it was an incredibly good  ripening year. No matter the quality of this 2012 vintage, it was clear that from the several hundred people in attendance that there was pent up demand for what is already being produced on the western shores of the Lake Champlain Valley.

This should have been the second year of the festival for organizer Tom Frey, but last year, the flames that consumed his family business at Elf’s Farm Winery & Cider Mill, followed by the flooding of Irene and Lee, put the kibosh on the planned inaugural. To postpone was disappointing, but it offered those involved time to rethink the event and to scale it up a bit more than they had originally envisioned, moving from the weather-exposed outdoor venue at Elf’s to the large indoor space of the Crete.

Situated just north of Plattsburgh the civic center drew visitors from all over the North Country, and I spoke to folks who ranged from the local, to those coming from near Buffalo, around Binghamton, as well as our neighbors from the Montreal metro.  Participating vendors came from as far as the Finger Lakes but most were from the surrounding county, albeit bringing in help from farther afield. Some had family members travelling from New York City and Washington D.C. to pitch-in. In another case, friends from wine country on the South Fork of Long Island came to support Elf’s Farm, and help pour the transitional brews and ferments that are getting them through while their own production gets back on track.

I had planned to attend the festival simply as an observer, and to taste some of the new juices that would be flowing, but as fate would have it, I was to become much more involved than anticipated.

The day before I arrived I had gotten an email from Frey, letting me know that the person who was to be leading the “Wine tasting 101” session had business travel problems and had to decline. He asked if I would consider filling in and as I’m naturally a team player, and have a hard time seeing a hole not filled, I saw this as an opportunity to lend support, since I’ve not been as active with the Lake Champlain Wines group this year, relative to past seasons.

Aside from my inability to skillfully handle a microphone while pouring and swirling wine at the same time, the seminar was well received by neophyte consumers and by those who seemed to be well practiced tasters.

Just prior to the educational session, the front door had seen several large and early rushes of ticket-holders and purchasers soon after the gate opened, to the surprise of the event staff.  Seeing that the check-in process was threatened with being overwhelmed, I helped to organized a couple of other volunteers and we set up an assembly line to fill the event glasses with the requisite raffle tickets and food voucher ticket that were included in the $25 entry fee.  Thanks to New York’s Farm Winery laws, vendors were able to not only offer free samples, but to sell their products on site as well, and it was clear to me that the former often inspired the latter.

Having moved right from the initial crowd rush, and directly into the tasting presentation, I realized that I needed to get cracking because lines at the tasting tables were growing quickly.  A quick scanning trip around the Crete to determine an approach plan was quickly halted when I saw that Richard Lamoy of Hid-in-Pines Vineyard was manning his booth alone, and his line was growing as well.  It turns out that his son and friend were en-route to assist, but had some travel difficulty of their own and would not arrive for another hour or so.

Richard is a friend and cold-climate viticulture mentor who has shared a lot with me over the years.  There was no way I could leave him hanging by himself, so I helped break open bottles, ran the register, talked to the tasters and tasted with them while he poured, until the cavalry arrived.

Free to finally make my rounds with not much remaining time, the tasting lines had become quite long, and I saw no way to get anywhere without pulling some strings.  As politely as I could, I approached the back of the few tables that I really wanted to visit in order to taste  beverages made specifically with locally sourced ingredients.  Being a region that is just out of the gate, young wineries, aside from Lamoy’s and the cideries, often need to supplement production with fruit and juice from the Finger Lakes or farther afield to make the early ends meet until their own sources mature.  It is a pragmatic, economical Yankee decision, that all of them hope to obviate through local production of crop varieties that they believe in.

Some might chuckle at the very term ‘Adirondack Coast‘ which has a certain marketing ring to it and is employed by the state tourism resource at GoAdironadack.com,  but for those that live along the lake shore or in the hills and mountains adjacent, that concept is anything but new.

The New York shore of the big lake is populated by places that speak of its function as an historic waterway.  The series of towns at Port Henry, Westport, and Port Kent are named for the reality of a time where life in this part of the frontier was built upon the water’s edge and conveyed upon its surface.  Wood, ore, fish, game, pelts, and ice were all commodities that flowed from the hills and shores south to the cities.  Ticonderoga, Essex, and Plattsburg are historically important towns that still curate memories of days from the rugged dawn of American colonial society and of pivotal events which led in the direction of independence for the infant nation that followed.

Rugged origins and steadfast independence are characteristics that still define the NY North Country.  Facing a rough beverage industry and highly individualized consumer climate, those assets will not only be helpful, but necessities.

How long might it be before a Lake Champlain sailing vessel like the Lois McClure delivers an educational cargo load of ADK Coast wine, cider and beer to Manhattan?

Amazing Grace Vineyards -Chazy
Aiden’s White Estate
Kay Gray, La Crescent, Edelweiss
A juicy wash of grapefruit and passion fruit, with nice balance between the sweetness and fresh acidity.  Basic table white for the sweeter palate, would probably be quite fine with a spicy stir fry.

Olde Orchard Sweet – Sparkling
From a line-up of ciders that  are fermented to dry,  back sweetened to serve a number of different palates, and then pasteurized, I really enjoyed the bottle conditioned pop of the Olde Orchard Sweet which had great fruit, and a nice skin astringency in the back end.  Definitely made me think it would be a good Thanksgiving pairing.