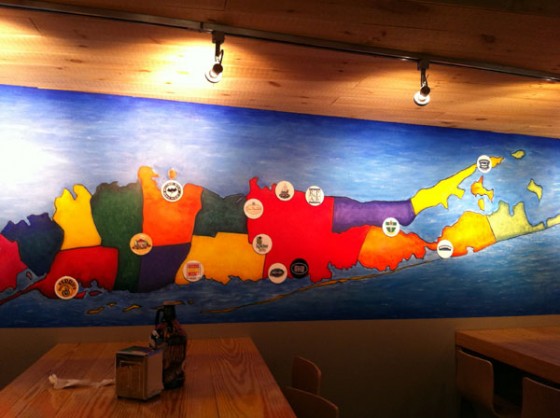 Last week, I visited Hoptron Brewtique — which opened last December on West Main St in Patchogue — for the first time. Some fellow beer enthusiasts and I dropped in to see what all the hype was about. Conclusion: this isn’t just another local bar promoting local craft beer. This place is soaked in it.

Walking in, I immediately got the sense that I was in the right place. A small mill for crushing grain was parked in the corner, adjacent to a wall of homebrew supplies.  Hoptron carries all the necessities to brew one kick-ass ale — everything from fermentation vessels to exotic hop and yeast varieties.

Okay, okay. I may have gotten a bit distracted and I hadn’t even made it to the bar yet, which is definitely the focal point of the space. 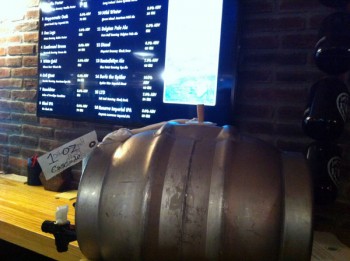 Out of the sixteen draft lines, seven of them were not just New York, but Long Island producers. In addition to the draft beers, there was a cask of “Hoppocratic Oath” from Great South Bay Brewery being poured. And we indulged.

It’s clear that Hoptron takes an educational approach to craft beer. With a knowledgeable staff, and classes like Homebrewing 101, people looking to learn more about their favorite malty beverage have a place to meet and learn.

The “beer flight” is a great deal, including 4 samples of your choice for $8, and it comes with a chart to write tasting notes on, if you’re into that.  Local organizations host events in the back of the building, which is reminiscent of a traditional beer hall with its long oak tables and benches.  There was a meeting of the Long Island Beer and Malt Enthusiasts, or LIBME, being held the night I visited.  This amicable group of people seemed right at home amongst the bags of grain and hops lining the walls. 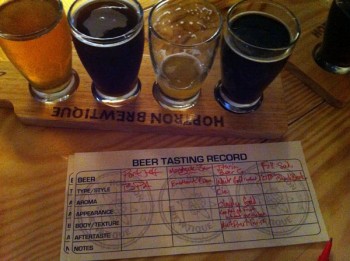 One of the main perks for me was the ability to not only have a beer by the 4oz. taste or 16oz. pint, but the option to bring beer home by the growler or bottle.  Most bars only have the ability to serve what will be consumed on premise. Hoptron circumvents this by operating under a Tavern Wine license, allowing the bar to serve wine and beer for on-premise consumption, as well as a takeaway product.

So if you like something you try at the bar, you can roam over to the bottle shelves and assemble your own six pack.  Its a great way to taste test before you buy, and go home with a nice hand-picked variety pack: a convenience any beer connoisseur can appreciate.

With BOBBIQUE, The Tap Room and Brickhouse Brewery just a few buildings away, West Main street in Patchogue, NY is turning into a beer lovers mecca.  The capacity for an afternoon pub crawl is palpable. I’ll definitely be back to fill some growlers and talk beer with new friends.