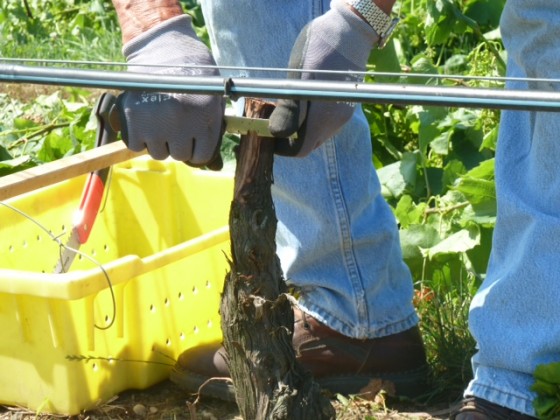 Spend time with grape growers, and you’ll eventually hear them lament, “I’d love to rip X variety out of the ground and replace it with Y variety, but it would cost a fortune in time and money.”

It’s true; the process of plowing up acres of vine, then planting new rows, can be cost prohibitive. I’ve heard from many winemakers over the years who tell me they’d love to get rid of their hybrid varieties. They’d love more riesling, for example. But it’s not like pulling up a Rose of Sharon and replacing it with a bed of Impatiens. Vineyard replacement can require a huge amount of labor. Then, the winery using those vines will have less material to work with, meaning less money coming in for a little while. The new planted vines will require several years before they can produce anything useful.

The solution that a few New York State producers have found lies in a technique called field grafting.

Instead of starting new, field grafting involves a crew grafting a new a vine on old trunks, which are left in the ground. Unfortunately for New York producers, local crews aren’t trained in the technique. That’s why Ravines Wine Cellars (in the Finger Lakes) and Peconic Bay Winery (on Long Island) turned to crews from the west coast.

In June 2009, Peconic Bay grafted seven acres of new malbec onto what used to be merlot. The winery discovered one of the most compelling reasons to try field grafting: time. The 2010 harvest included what General Manager Jim Silver called a “small crop of outstanding malbec.” Silver says the survival rate of the new plants was 95 percent. 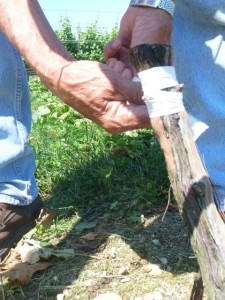 “We were so pleased that in 2010, we grafted five acres of chardonnay over to 2.5 new acres of pinot noir and 2.5 new acres of cabernet franc,” Silver said. The grafting took six days, with a crew of only two people. Silver explained that Peconic Bay covered their flight from California, their hotel and meals. Other costs included the budwood, and the crew charged roughly $1 per plant. Peconic Bay found the work to be a tremendous value.

“The field grafting was hugely successful,” Hallgren said. “We have at least a 98 percent take, with great bud viability.”

Peconic Bay and Ravines offer a small sample of what is possible in the future. “If field grafting became more widespread, we could finally start to match grape varieties to sites,” Hallgren said. “Think of all the great sites planted to hybrids and sometimes even natives.”

There is one significant risk involved in field grafting: The operation leaves the plant exposed to winter kill. That’s because the graft union is too high to be “hilled up,” a process of packing earth around the base of the plant to insulate it during winter. After a field graft, the union is roughly knee-to-waist high.

“We’ll have to see how that works out,” Hallgren said. “There is a risk of winter injury. The last time we were hit hard was 2004, so we’re optimistic.”

Hans Walter-Peterson, a Viticulture Extension Specialist for Cornell University’s Finger Lakes Grape Program, sees potential and risk. “Until we have a lot more confidence that climate change will make it unnecessary, the inability to protect that graft union would probably be the biggest concern,” he said. “There are some guys who are trying it on a very small scale, just to see what the results might be.” Ravines, Walter-Peterson noted, took a larger swing at field grafting.

During a visit last summer, Walter-Peterson was impressed with the field grafting at Ravines. “The results in the vineyard are really good. All of the vines looked healthy and grew well.”

For wine lovers, this might seem like an inside-baseball kind of technique. But it’s worth following the progress, because it marks another step in New York State’s mission to identify the best varieties for each individual site.