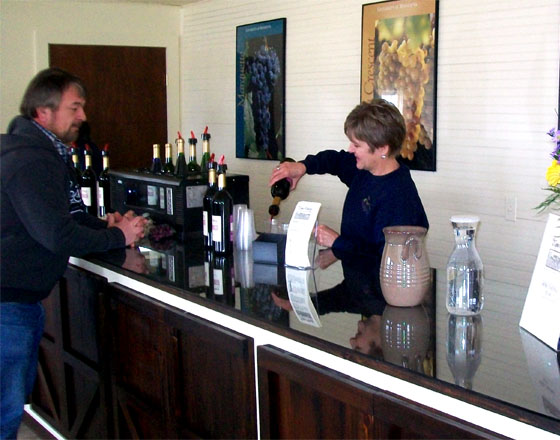 The official opening of the Cape Winery in Cape Vincent, NY is not until Memorial Day, but a recent springtime Saturday “soft opening” saw over a hundred people in the tasting room, more than a dozen cases of wine leave the premises in the hands of happy consumers, and folks joining the infant “case club.”
The current version of the New York State Wine Regions map shows expanded areas all around the state, and this latest opening already asks for those boundaries to be expanded even more.

Situated on a spit of limestone-based land that has Lake Superior on one side and the wide start of the Saint Lawrence River on the other, operator Dave Fralick shared with me that while others he knew took a hit from the late spring frosts of 2012, his vineyard showed no impact whatsoever, and it was only the super dry summer that limited production, as it did for many others around the state.

Cape Winery may be a new project — they do not even have a web presence yet — but its proprietor has been making wine as an amateur for a number of years, using fruit from Canada in Prince Edward County, just a stones throw and a ferry ride north. It was after a local grape growers meeting in Watertown that he’d attended a few years ago, out of curiosity, that Dave ended up with 75 vines. Another participant had ordered in excess and was willing to share.

With the idea that he could save some money making wine from his own fruit, rather than purchasing, the next year saw another 600 vines, with 800 more a year later.  At this point, his understanding but well-aware-of-the-situation spouse Sandra, told him that he needed to do something with all the wine that would be produced. Together, they built Cape Winery.

Plantings at Cape Winery include Marquette, La Crescent, Frontenac, and the grape recently named as Aromella by a loyal NYCR reader.  This past year, under the pressure of drought, was their first production harvest, and so commercial wines have been supplemented by access to fruit from the Finger Lakes just two hours to the south.  Many small wineries need to take a similar steps in the early years, and in this case the connection is a relatively local one. While Phil Randazzo at Coyote Moon has been an important mentor to Dave, he has also found consistent support with regard to viticulture and wine making, from the Finger Lakes community, and even engaged in a  bottle swap with folks down there, at least one of whom requested more of his experimentation with a full malo-lactic fermentation and oak aging of La Crescent.

What I found most interesting about the report from the soft-opening, was that over half of the purchases, based on tasting, were white wine, and that nearly every person who bought a bottle of the Cape Winery Finger Lakes Riesling, also bought the locally grown La Crescent, which supports observations I previously have made regarding the taste relationship between these grapes. There is also a full bodied , dry Frontenac in the pipe which got Phil Randazzo’s stamp of approval, and is likely to be released some time in July.  During the course of the phone conversation I had with Dave, during discussion of minute details about cold-hardy wine making, we realized that we actually had met briefly a couple of years ago, at a tasting held on the premises of the Cornell Baker Farm Cold Hardy Vineyard trial in Willsboro, NY.  Since he’s been all the way over here, I need to plan on making the half-day trip across the Adirondacks, to check out the Thousand Islands Wine Trail, and expect that there is good reason for others to consider doing the same.