\Upon completing the founding document, they realized that if four industry veterans from four very different producers could agree on a single set of standards, it was possible for all of Long Island’s vineyards to embrace such a program.

This may be your first time hearing about LISW — because it has been flying relatively under the radar.  “We’ve actually been spending most of our time developing the nuts and bolts of the program,” Rich Olsen-Harbich told me. “It really needs to be successful and sustainable for the long haul and in order to do that, we felt our efforts were better spent on codifying practices — not marketing.”

At a high level, sustainable vineyard management has realistic ideals. It strives to find the sweet spot where the benefit to the environment, the benefit to society, and the benefit to local business successfully overlap. After all, the wine industry has to remain financially viable in order to survive.  LISW founders believe that not only can we work with nature in the vineyards, but that when properly implemented, sustainable practices can result in nature doing much of the work for us. For example, Barbara Shinn has found that a 40-yard section of compost can save $2,000 annually in nutrient sourcing.

[quote] Being sustainable is a process and a pathway. One never gets to the point where they are completely sustainable – that doesn’t exist.” – Rich Olsen-Harbich[/quote]

Last month Barbara gave me a hands-on introduction to sustainable soil management. That day she was putting her money-saving compost to use in brewing compost tea, a liquid soil amendment that fosters microbes. Her self-created brew, which she considers the “definitive Long Island recipe,” is composed of a base of water blended with seaweed, unused odds and ends of fish, and carbon. Once the mix reaches the desired temperature, she adds in the tea bag of compost — and it is one serious tea bag, full of 10 lbs. worth of pomace, horse manure, egg shells, coffee grinds, and woodchips.  24 hours of steeping later,  this 50-gallon, fully organic concoction will yield trillions of microbes, and will be sprayed onto the soil as the last soil drench of the season in preparation for budbreak.

The benefits of compost tea are numerous. Microbe diversity has been implicated in the suppression of vine diseases. They promote biodiversity, acting as fodder for organisms that will provide materials beneficial to the vine’s health. These organisms will in turn feed soil predators which feed on vine pests as well. In contrast to chemical fertilizers, the organic matter that the tea is composed of is slower to release nutrients and remains stable in the soil until it is needed, leading to greater longevity of accessible plant nourishment and a reduction in soil leaching.

Leaching has been one of LISW’s primary focuses from the start. It cannot be stressed enough how fragile Long Island’s environment is. Virtually all of our area’s water comes from the Pine Barrens, and it is particularly susceptible to contamination from the treatments we use on our farms, our lawns, and the like.  This once-pristine resource has been compromised by tens of detrimental chemicals. Such chemicals are also a concern when it comes to runoff, as they pollute the delicate bodies of water that run through and surround Long Island. LISW has been proactive in curtailing this trend by including bans on all pre-emergent herbicides in their guidelines, as well as three of the major pesticides found in the groundwater supply. 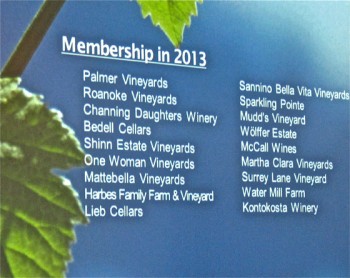 To further publicize this need for change, LISW has partnered with the Citizens Campaign for the Environment, and Rich Olsen-Harbich recently testified before a State Senate hearing on the issue. LISW’s preventative measures are not limited to what they’ve set forth thus far; as the program progresses, a materials committee will be constantly reviewing the tendencies of certain materials to leach into soil.

When I met with Barbara, she strongly emphasized that the association’s guidelines are a “living document created to evolve in a way that year after year can effect positive environmental change.” Nothing is set in stone; they are prepared to review all their processes and adjust them as needed for the following year.  As Rich expressed, LISW has “a solid definition of what being sustainable truly means and a program of specific strategies that a grower can follow.”  \

The organization doesn’t just talk a good game, either. The implementation of their current 200-plus grape growing practices, based on the New York Vine Balance Grower Workbook, is stringent. Instead of relying on self-regulation, all member vineyards are subject to third-party certification by Allen Conell, former District Conservationist of the U.S. Department of Agriculture National Resource Conservation service.

Ten vineyards — 400 planted acres — have been certified sustainable thus far, with another seven vineyards transitioning towards certification during the current vintage. That’s a pretty amazing feat to achieve in 12 months. Going forward, Larry Perrine and Barbara hope to expand LISW’s technical advisory board with the goal of partnering with new members as they navigate the pathway to sustainability certification.

Though only just created and compiled, many of LISW’s guidelines are not new concepts. Practices for maintaining healthy vineyards — while producing quality fruit — have constantly been developed throughout our wine country’s 40-year history. Still, the rapid growth of this program provides a glimpse into the future of Long Island winemaking, wherein our vineyards will attain a more symbiotic relationship with the ecosystem they inhabit.  As Rich told me, “Being sustainable is a process and a pathway. One never gets to the point where they are completely sustainable – that doesn’t exist. Instead LISW helps growers simply pay more attention to what they’re doing, help them think about their surroundings and the impacts of what they are doing and to be better neighbors to both people and the environment around us. In the end, I think we’ll make even better wine because of it.”