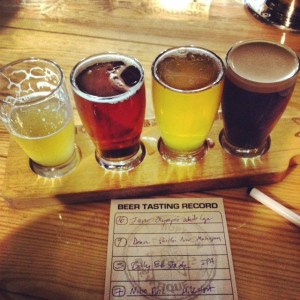 Last week SingleCut Beersmiths of Astoria, Queens started selling its beer on Long Island. Although there was no bridge separating Long Islanders from the in-house brewed beers of SingleCut, it took them a couple of years to establish themselves in the borough that has become a hotspot for small, start-up breweries. In 2012, Singlecut was one of the first breweries to open in Queens since prohibition and has since been joined by names like Rockaway Brewing Company, Finback Brewery and nano-breweries Big Alice Brewing and Bridge and Tunnel Brewery.

Last Wednesday, Hoptron Brewtique celebrated SingleCut’s arrival by bringing in seven different beers on tap.  Overall, I was impressed with the quality and range of styles that they were able to pull off.  According to Hoptron’s website (which allows you to track how much is left in each keg they pour) all but one are kicked!

I tasted all 7 at the bar and definitely had some favorites:

Jan “Olympic White Lagrrr” – 5.2% ABV, 14 IBU
A testament that enjoying beer is situational, I was drinking this the other night when it was 15 degrees as opposed to last summer (when I first tried it) on a stinking hot day. I enjoyed it much more during the latter situation, but it’s crisp, light and enjoyable even on a freezing night.

Eric “Nitro Milk Stout” – 5.6% ABV, 28 IBU
This nitrogen-carbonated stout was my favorite of the bunch. A “milk” stout just means that there was some lactose used in the brew that is unfermentable, resulting in a slight sweetness that lends a great mouthfeel and texture to the beer.  This beer is dominated by creamy espresso flavors and almost looks like one when poured. It drinks extremely easily for its dark color and profile.

John Michael “Rum Barrel-Aged Dark Lagrrr” – 6% ABV, 45 IBU
Even though they’re all the rage, I’m admittedly not a fan of most barrel-aged beers. Maybe it’s my love of wine, and the notion that my beer shouldn’t taste anything like it. Maybe it’s that I’m a bit of a purist. When I hear people oozing over this style I want to say “Hey, you should try this stuff called wine, I think you’d really like it.” I often feel like the oak can overwhelm a beer and swallow up any finesse. The John Michael surprised me in its smooth malt quality, with just a dose of vanilla and caramel flavor pulled from the oak.  Not cloyingly sweet or too rich, it drank like a Scotch Ale with a slight tartness on the long silky finish.