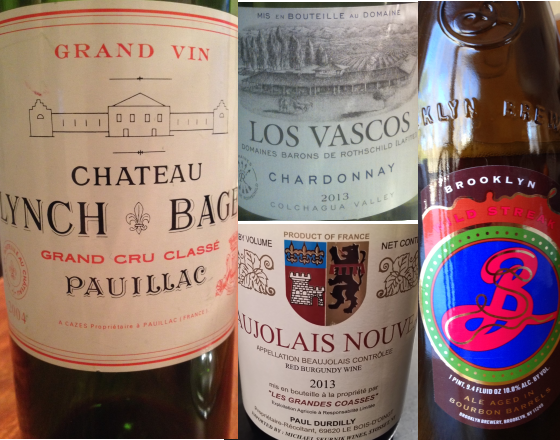 Gibson Campbell: 2004 Chateau Lynch Bages, Pauillac
It’s not often I get to drink good Bordeaux.  In fact, I almost never do. That’s why this bottle was so exciting for me.  The age of the wine was not evident at first glance with bright ruby around the rim and a dark garnet core. It’s a classic Bordeaux blend of cabernet sauvignon, merlot, cabernet franc, and petit verdot.

It opens up on the nose with cooked mushroom and cooked beef. After some time in the glass, a soft oak character and cigar-box notes start to show. The palate shows more fruit than the nose insinuates, with mostly red cherry, plum and a hint of violet.  More of that spicy cigar box returns with a cinnamon note intertwined.  The tannins are still grippy, providing the wine with good backbone and helping concentrate the fruit on its exceptionally long, spicy finish.

I would guess this wine could be cellared for many years to come but enjoyed it this past weekend in its relative youth.   This bottle finally made me understands people’s (sometimes misguided or irritating) comparison of Long Island blends to Bordeaux blends.

Paul Zorovich: Bordeaux & Chinon
Since we finally have the date for our move to the Finger Lakes, my wife and I have started our “farewell tour” with friends and family in the NYC area. The first stop was at Saint George Bistro in Hastings, NY, where we had an absolutely lovely meal accompanied by a bottle of Chateau Riviere Lacoste bordeaux blanc and a bottle of Domaine de Pallus Les Pensees de Pallus Chinon.

The white was grassier than I generally like my Bordeaux to be, but the 60% semillon,40% sauvignon blanc blend went quite nicely with my duck rillette appetizer. The red was a typical Chinon, softer than most cab francs, and absolutely right with steak frites. A good start to our last month in the city.

Katie Pizzuto: Brooklyn Brewery’s Wild Streak
BB’s ghost bottles are the ones that never see the light of a shelf. But recently, Brooklyn started what they call the BQE (Brooklyn Quarterly Experiment) which launches a few thousand cases of one of these ghost bottles every three months and I managed to wrangle one down.

Described as a Belgian-inspired ale, aged for several months in second-use bourbon barrels, bottled the flat and re-fermented with a blend of priming sugar, Champagne yeast and Brettanomyces.

I was actually hoping for something really wild, and instead got something that was at most just beginning to roam near the fences. I wanted the earthiness. I wanted the tanginess. I wanted the funk’ Wild Streak wasn’t quite a “sour” beer, but there was plenty of tartness to get the thirst buds going. I was honestly expecting it to lean more heavily towards the Flemish or Lambic style, but that sucker refused to lean for me. It had a light haze and a pale orange body, with a nose that gave off bits of sour berries, vanilla, yeast and tropical fruit. It was beautiful, it was balanced and it was earthy, but I just couldn’t find the funk. So when the $20 bottle was empty, I went to the turntable and put on some Sly and the Family Stone…and that tore the roof off!

Michael Gorton: Domaine Durdilly “Les Grandees Coasses” Beaujolais Nouveau 2013
Gamay.  The poor mans’ pinot.  It’s so close its not even funny. I have been on a personal exploration of Morgon and the surrounding regions for some time now and very rarely am I disappointed. Beaujolais is on my wish list for places to visit. The wines of Beaujolais and the crus, Brouilly, Moulin-a-Vent and of course Morgon are simple, expressive and satisfying. To see where they come from and to meet the people who make them are on my bucket list.

Paul Durdily is the wine maker of this small family estate. According to information I found online, the vineyard is in the southern-most part of Beaujolis near Le Bois d’Oingt.  It has one of the highest elevations in the region.  100% estate fruit, this wine is hand harvested fermented with native yeasts. This is not your grandfathers BOJO, it’s mine.  Packed with notes of sour cherry, just picked raspberry, red currants and dried violets, the nose doesn’t disappoint.  The same aromas carry over on to the palate, but with more slate and mineral notes. Think back as a kid, throwing a rock into a puddle that developed on your concrete driveway after a rain storm; that’s the mineral element. The lengthy finish of cherries and flowers makes it last a whole meal.

Juicy and fresh the vibrant acidity makes you never put down your glass.  Near perfect balance with just a touch of tannins that help give the wine some structure.  It’s the acid however that holds this together. Four days later, it still had life (I forgot about the last glass I was saving).  I snagged this for $15 at a local wine shop under new ownership.  I must go in an compliment them on this addition.  And hope they have more.

Todd Trzaskos: Los Vascos Chardonnay 2013
Truth be told, chardonnay is not a go-to grape for my palate, even though I have been very fortunate to enjoy a number of really fine examples from Burgundy, Chablis, California and Austria.  The un-oaked, gently-oaked and sensibly-oaked versions being more favored, in that order. We’ve even made Chardonnay from Chile in our neighborhood crush club, and blended it with Viognier from the same area of the Curico Valley. It’s not exactly my style of wine but it’s quite serviceable, the club loves it, and we’ll probably do it again this spring. Since it is not a variety I go searching for, I’m glad that fate seems to put interesting incarnations in my path.

If we could make a Chardonnay like the Los Vascos at home, it would be dangerous. I’d recently received this bottle as a sample and was eager to try it because I have a consistent interest in what Chile is producing and we’ve been proponents of what we’ve already enjoyed from this Barons De Rothschild (Lafite) project.  It’s not what you would call a knock-out, but quality for price, it’s the kind of wine that respectfully deserves its opportunity to appear on the daily table.  Aromatics hang towards green tropical, while the palate goes more towards green apple.  It’s a little round, but not fat, and it’s brawn reads a lot leaner than the 14.5% alcohol it reports to carry.  Normally I would think that would be too much, but it held it well, and the finish was not heat but a lingering touch of sweet barrel spice.  Had the Los Vascos with a smoked ham dinner, and while there were some nice reds on the table, it was the wine I kept returning to.