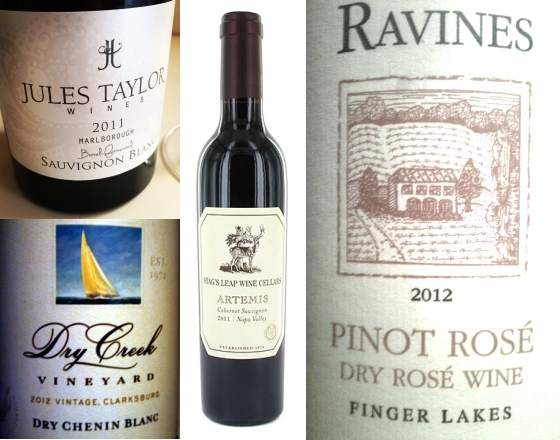 Lenn Thompson, Executive Editor: Jules Taylor Wines 2011 Barrel Fermented Sauvignon Blanc
I don’t get wine as a gift very often, but when a teammate at my day job was in town from the Bay Area, he brought me a couple wines that he and his wife enjoy. His wife is the general manager of an importer, so that means more than it might otherwise.
When I saw “Barrel Fermented” on the label, it gave me pause. My disdain for oaky whites is well documented. But only older barrels were used here and I have to tell you — I really liked this wine. The time in oak brought a roundness to the mid-palate and softened the typical Kiwi grassiness, allowing intense passionfruit and green apple flavors to shine, with citrus blossom notes beneath. Once it warmed to room temperature, there was a tiny bit of butterscotch too, but that was just a layer of complexity, not obstructive in the least. Juicy acidity kept it all together and stretched the finish out nicely, too. The bottle didn’t last long.

Todd Trzaskos, Contributing Editor: Ravines Wine Cellars 2012 Pinot Noir Rosé
I was asked to put together a class for a local community education initiative, so last week we convened about twenty people for a presentation called “Wine Exploration on a Budget” which  covered a number of factors that determine the cost of a bottle of wine, and how to work towards getting the best quality for the money we choose to spend. We covered a lot of ground and tasted some wines from lesser known areas, including this snappy pink that really woke folks up from my lecturing. Amazed at the approachable price, a number of participants said they would be looking for the next release.

The next night I revisited the remainders with the evening meal. One of those nights where we looked forward to having breakfast for dinner. Gorgeous local eggs, breakfast links from the same farm, and CSA potatoes mashed once and a second run browned in butter on the skillet.

The wine burst with savory aromatics that really magnified the sausage. Herbal, light fennel, a little bit of red currant… a creamy and soft nose lined by petrichor (love that word and what it represents!)

James Silver, Business Editor:  Stags Leap Cellars 2011 Artemis Cabernet Sauvignon
A lot is being made of the new California wines. Those that are a little lower in alcohol, a little higher in acid, and decidedly more food friendly.

Whether you believe it is the consumer moving the needle here, or the waning of Parker’s authority and influence, I actually think it’s neither. I think it’s the younger winemakers who are pushing the new model. It took time, but eventually the science behind physiological ripeness became clearer, and that wine didn’t actually need to be 15.5% alcohol to be “impressive;” quite the opposite. Perhaps exaggerating all that was unhealthy and decadent about a wine seemed out of fashion?

Balance takes over – almost like the industry took a collective yoga class. Of course the company I work for now has been espousing this philosophy for decades. Seemingly so has this one pictured. I can’t afford Stag’s Leap Wine Cellars too much anymore, so this was a treat. SLWC has always been a wine of balance and architecture. I tasted the ’73 and ’74 in 1993 and it wasn’t too much different a style. They’ve suffered a slew of low scores for their methods (like Mondavi and others too…) but proved there were customers for their elegant product. Just a touch of herbs, cedar and earth, with a fine, low key black berry and cassis. Long and impressive. Hard to hold back my enthusiasm. The lead pencil character is still years off, but I imagine it’ll get there just as surely as the older ones did when they were 20 years old. Few 15% alcohol wines will see their 20th birthday unless they’re Ports. Well, maybe they’ll see them, I just wouldn’t want to be them.

Paul Zorovich: Dry Creek 2012 Chenin Blanc
St Paddy’s day dinner.  My wife’s birthday.  Sunday with the family.  Whatever you call it, it was a chance to dip into my father-in-law’s cellar.  He’s been a member of Dry Creek’s wine club for years, so the wine fridge had a lot of their product.  This was nice as a prelude to dinner, with a little minerality and peach on the front and lychee on the back and an appropriately light amount of sweetness all around.  An absolute steal at $12, it’s perfect for summer picnics or even the beach, assuming you can hide it from the rent-a-cops that patrol the boardwalk on those stupid Segways.