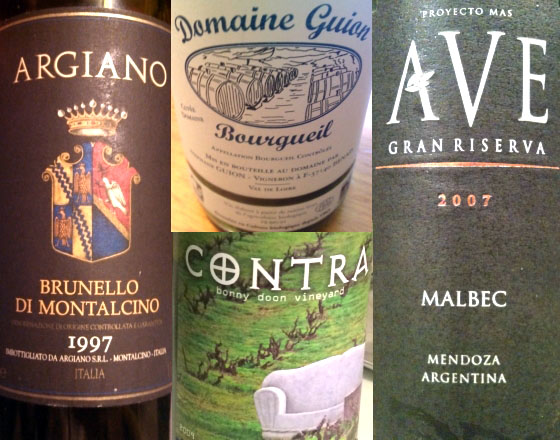 Lenn Thompson, Executive Editor: Paumanok Vineyards 2012 Riesling
Saturday night, we hosted three couples — new-ish friends we’ve made through our first grader, actually — for drinks before heading out to dinner together to our local BYO joint.

I pulled nearly a case of New York wines from my cellar and I could easily have picked any of them for WWD this week. Instead, I’m going to write about this bottle that one of the couple brought for us as a “host/hostess gift.”

It’s rare that someone brings wine to my house (why? I WANT it as a gift, always) and I hadn’t had this wine in some time (the 2013 is out now). I cracked it open Monday night as I was cooking and then finished it with my wife. I didn’t take a single note either. We just drank it together — first while the kids were eating their dinner and then finished it off with our own dinner. Just off-dry with plenty of crunchy acidity, it was perfect and satisfying. Not every wine has to be profound. Thanks, Jen and Don.

Evan Dawson, Managing Editor: Domaine Guion 2010 Bourguiel
Brett. Three different 2010 Loire Valley Cabernet francs this past weekend, and two had Brett. Neither wine was dominated by the Brett, but it reminded me of two things:

The Brett-free wine was vibrant, soil-soaked, and spoke freely of place. Thankfully, the argument that Brett is part of place has been settled. It’s not. (Cue the exceptions; I’ve heard them.)

Sadly, so often a fan of a wine will argue that the Brett “blows off” over time. The Guion is an enjoyable wine, but I wouldn’t invest too much in the notion of Brett “blowing off.”

Todd Trzaskos, Contributing Editor: Ave 2007 Malbec Gran Riserva
The first time I tasted a Malbec from Ave a few years ago, it was their introductory level product and a happy but disorienting experience. My brain had been ready for one thing and it was faced with something unexpected. I’d had enough Malbec from Argentina to have some sense of what to look for, but the wine’s aromatics and palate were more of the dried cherry and old cellars of Italy than anything from South America. It turned out when I found half the label printed in Italian and followed-up, that the producers are a Tuscan and a Milanese with Alberto Antonini as their winemaker. That might explain things. I used to only be able to get the wine online, but it has recently and thankfully found distribution in our market.

The Gran Riserva is the big brother of that first Ave Malbec I had, this one growing at higher altitude somewhere over 900 meters. Like it’s sibling, it still has a Italian cave-like sensibility about its airs, and it’s not just the light impression of French oak that does it.  This is the kind of Malbec that we remember knocking us out when it first showed up a decade ago.  Definitely needing a decant for it to have time to blossom, with rich plummy notes wrapped in earth, anise and new leather. In the glass it is a sweet burst of fresh purple fruit that is wide but retaining quite lively acidity.  The wine washes through to a red spectrum, with drying, astringent skin tannin that leaks a tartness which still echoes the initial juiciness.

Screams for a steak, a plea which we answered.  Definitely worth a search and a try, if you think you’ve run completely through your Malbec options.

Kevin Welch, Finger Lakes Correspondent: Bonny Doon Vineyard 2009 Contra
I recently have been experiencing a wine drought due to quite a bit of travel for work and a whole lot of less than interesting wine lists in hotel restaurants. So it simply has been easier to reach for a beer then put the effort into finding a less than stimulating glass of vino. However, a last-minute visit from my sister over the weekend was a great opportunity to reach into the cellar and pull out something fun.
Bonny Doon’s Contra hits the trifecta; price, taste and story. This great California red is a steal at $15 and pays homage to century old Contra Costa County vines of Carignane, Mourvèdre, Grenache, Syrah and even a little Zinfandel for good measure. Likely even more interesting than this eclectic blend is Bonny Doon’s icon and Original Rhone Deranger, Randall Grahm, seen here in top form celebrating this wine.

Paul Zorovich, Finger Lakes Correspondent: Argiano 1997 Brunello di Montalcino
One last dinner with the in-laws before the move. Lamb ragu over pappardelle. I raided the cellar and brought up some cabs, but someone else brought this Brunello so we opened it first. I could only make sketchy notes (phones and computers are frowned on at table), so here they are unedited:

Terrific.  Fruit.  Blackberry.  Licorice.  Huge but not overwhelming.  Not at all tannic.  Wow.

Enjoyed this bottle immensely, if you couldn’t tell… We don’t get a chance to drink older Brunellos too often and we made the most of this opportunity.

Katie Pizzuto, Art Director: Tuthilltown’s Half Moon Orchard Gin
Being that my birthday is today I started the celebration early this weekend and bought myself a bottle of Tuthilltown’s Half Moon Orchard Gin which has become a favorite as of late. It’s uniqueness stems from being made from local apples, creating this unctuous, sexy, round elixir. The Anna Nicole Smith of gins, I guess. Of course there are the telltale notes of juniper and citrus but the scent of apples creeps up from behind and lets you know this is definitely not your father’s gin. It’s not a complex gin—a reflective gin—but it’s got a shitload of personality to make up for that, and when used in a cocktail, perhaps with some fresh basil and a little pomegranate juice, it’s intoxicating.