I’m back this week with more reportage on the Long Island beer scene.

For the whole story, you’ll have to listen to the podcast (links below), but I’ll give you a quick overview of what to expect.

On today’s show, I take a trip to out to Big Z Beverage in Huntington (1675 East Jericho Tpk., 631-499-3479) and talk to the new owner, Mark Tuchman.  He took over the business a little over two months ago and he’s been reshaping his beer store into a craft beer destination.

In the Long Island Beer Round-up, I give you a quick report on a visit to Canterbury Ales. I had a couple of Southampton beers on tap that night, and the Hanami Ale from Smuttynose. The tap system at Painter’s is back up and running and pouring three different Blue Point ales, but the only tap pouring fresh beer was the Blueberry Ale, both the Summer Ale and Toasted Lager were past their prime. 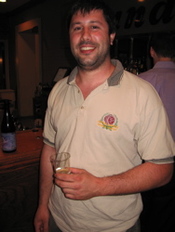 Also on the Calendar, DEKS in Rocky Point is hosting another Beer Dinner.  This one will be on July 11th at 7 pm, so mark your calendars.  I have a food menu and Mike and I are working on the beer pairings. I’ll let you know next week what we came up with. Also, DEKS has a new beer on tap; it’s the Sixpoint Brownstone. It’s very fresh and delicious right now, so go soon.  I’ll be there later today to have a pint or two.

I’ll tell you about the B.E.E.R. (Suffolk County’s homebrew clue) meeting and about Scott Vaccaro from Captain Lawrence Brewing Company in Pleasantville, New York. Scott talked to the club for about twenty minutes and then served up six excellent bottled beers. I play a four minute clip where Scott talks about his brewery and his beers.

Captain Lawrence is not yet distributing its beers to Suffolk County, but I have had a few of Scott’s beers on cask at Bobbique in Patchogue.

I wrap up the show with a trip out to our CSA, a good place to get locally grown and organic ingredients for your brewing.

Just to remind you, if you love beer and/or whiskey, you’ll want to join the Long Island Malt Enthusiast mailing list.  I’ll keep you alerted of all the news on Long Island beer and whiskey news.