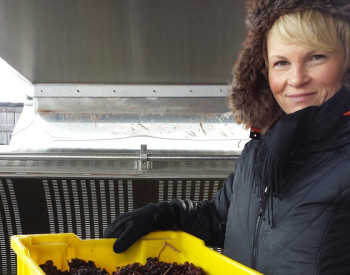 Keuka Spring Vineyards has received a lot of attention the last couple years especially after receiving the Governor’s Cup trophy for their 2012 Riesling at last year’s annual New York Wine & Food Classic competition. One of the people diligently working hard to make it all happen is assistant winemaker Meg Tipton.

Tipton had already found her career path, for years working at an ad agency an then as a director for an international housewares company. When her family however relocated to Rochester she decided it was time to pursue a passion and enrolled at Viticultre program at Finger Lakes Community College.

In the fall of 2011, shortly after starting at FLCC, Tipton got an interview at Keuka Spring to help with the fall harvest. With no prior wine experience and a clear of unfamiliarity driving industry staples such as tractors and forklifts, Meg thought her chances were slim. Her prior success in business and determination and eagerness to learn wine must have shown through however as by the time the interview was concluded Tipton was asked how soon she could start.

After harvest was finished Tipton returned to focusing in the classroom and when spring rolled around found an opportunity working amongst the vines at Anthony Road. Later that year when harvest again approached, Meg looked to return Keuka Spring for the season but was pleasantly greeted with a full time role, assistant winemaker where she remains currently.

Like may aspiring winemakers, Tipton hopes to one day have her own label where she can create wines that reflect her sense of style and creativity. To that end, Meg has gotten a head start with what she calls home winemaking on steroids and is currently in the process of restoring a vintage Italian grape press. We sat down with Tipton and here she answers our 5 Questions.

What was the first bottle of wine you remember drinking — and where did you have it and who were you with?
Aside from the occasional teenage raid of my parents’ wine carafe, which was usually filled with Taylor Chablis, my first memorable wine was at Jefferson Vineyards in Monticello, Virginia in my early 20s. At the time, I didn’t know what an enormous impact Jefferson had on the American wine industry. I was on a date with my (now) husband and we bought a bottle of Cabernet Sauvignon. We kept that bottle for far too many years and it was well past its prime when we opened it. Nevertheless, the memory stayed with me and I still have the empty bottle. In more than one way, this visit was a foreshadowing of things to come in my life.

When did you know that you wanted to be in the wine industry?
Since that time in my early 20s, I have always had a deep curiosity about wine. I always wanted to see “behind the curtain” but for a variety of reasons, never considered winemaking a career until much later. We traveled a lot before having children and almost always found ourselves in wine regions. Some of our best and most insightful trips were in South America, Italy, and California. These experiences fueled my interest in wine and it became more of an obsession.

We moved to Rochester in 2011 when my twins were five and about to enter kindergarten. I was ready to add another dimension to my life and I realized this amazing region was within reach. It was time to get serious. I jumped in feet first and enrolled in FLCC to pursue a Viticulture and Enology degree, which I completed in 2013. I haven’t looked back for a second. It was one of the best decisions I’ve ever made.

What do you wish were different about the New York wine community and industry?
I wish there were more emphasis on safety. I work in a cellar where harnesses and safety lines are the norm, but in many cellars this is the exception rather than the rule. This industry is inherently dangerous and protecting workers should be a foregone conclusion. It doesn’t have to cost a fortune to have a very effective system and it should be part of every winery’s infrastructure.

When you’re not drinking your own wines, what are you drinking?
In general, I find myself drawn toward higher-acid dry wines such as sauvignon blanc from Sancerre, Australia, or New Zealand, Albariño from Rίas Baixas, chenin blanc from Savennières (when I can find it), and of course riesling from the Finger Lakes! I also adore dry rosé from our region and from Provence, especially when the acid is prevalent, crisp, and well-balanced with the fruit. On the other end of the spectrum, I love power house reds like aged California cabs and higher alcohol zinfandels.

If you could only pick one grape/wine/producer to live out your days with on a deserted island, what would it be?
This is like asking me which of my children I like best. It’s an impossible question! If I had to choose, I would probably say riesling. I don’t mean to sound like a Finger Lakes cliché by choosing it, but I love the diversity that can come from this grape. It can be steely and citrusy or tropical and mouth-filling. It is great dry or sweet so long as each is balanced. It is a chameleon and can be coaxed by the winemaker to show different sides of itself. It is also the perfect example of regional diversity and perhaps more than other varietals, can be completely unique from one vineyard site to the next. It would give me a lifetime of choices on that island!