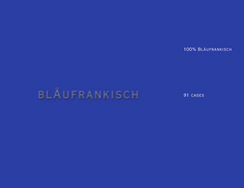 When Andrew of Spittoon fame emailed me asking to host an upcoming vintage of Wine Blogging Wednesday, how could I say no? He’s one of the most prolific wine bloggers out there and someone I’ve had some interesting conversations with via email. I knew he’d come up with something clever…and he certainly didn’t disappoint. His theme, "Obscure Red Varietals" is one of the more interesting ones we’ve had to date.

I always try to not drink Long Island wines for WBW, and usually it’s easy because the themes don’t work out for L.I. wine anyway. I thought I’d have to leave this over-grown sand bar for my WBW once again.

But then I visited Channing Daughters Winery a few weeks ago and got my first sip of their 2003 Blaufrankisch. I was hooked.

A major grape in Austria and Hungary, Blaufrankisch uses various aliases depending on
the region it’s growing in. In the U.S. (Washington State makes some), for instance, it usually goes by
Lemberger. It also grows in Northern Italy, Germany and a few other areas I believe.

Channing
Daughters is the only Long Island winery to grow and produce
Blaufrankisch (this is their second release). They are one of only two
wineries in all of New York State doing it, and the other is where
Channing Daughters got their vines.

It’s an early ripening red…so I’m a little surprised more people aren’t growing it in NY. Maybe this wine will start a trend.

The grapes for this wine were harvested by hand on Octover 21, 2003
and destemmed into one-ton bins. The fruit was then crushed by foot and
fermented before being put into French oak (1-4 years old) for 12
months. Unfined and unfiltered, it was finally bottled by gravity and
it won’t be released to the general public until this summer or fall.
Lucky for me, they sold me a couple bottles anyway.

In the glass, the Blaufrankisch is a rich, ruby color.
Swirling it in my glass, I noticed the slightest opaque quality…no
doubt the result how it was made (no fining and no filtration).

This wine’s aromas are beyond unique and inviting. Grilled
porterhouse steak sprinkled lightly with salt and black pepper
dominates the early nose with black plum and black cherry beneath. The
first sip of this medium-bodied red is equally rich, with meatiness
joined by more obvious cherry flavors. The tannins are very soft,
barely noticeable, but they contribute a spiciness that is very nice.
It really reminds me of an Old World wine with its constrained fruitiness
and bright acidity.

I decanted it for about 45 minutes to start with, but at
least another hour would have been ideal I think. A couple hours
later, some of the grilled meat aromas and flavors have faded slightly,
allowing more of the cherry flavors to come through. It became a touch
softer too.

Nena and I both really, REALLY enjoy this wine. In fact, we joined
their wine club largely to have access to the 178 cases made, since
most of last year’s release sold out just to club members. (UPDATE: The winemaker’s wife, Allison (who is also the winery manager), just emailed me after seeing this post…and this wine will not be released to the public because the wine club bought so much of it again this year.)

In terms of food pairing, we stayed true to Blaufrankisch’s roots,
enjoying it with creamy, spicy chicken paprikash over whole wheat
pasta. It was a great duo but I think this wine, with it’s meaty,
peppery flavors and acidity, would be great with most any carnivorous
meal. I can’t wait to drink this over the summer with grilled lamb or
even veal.

At $22, some might think it a little over priced (one prominent NY
wine writer seems to think so). But with the member discount, it’s
under 20 bucks. I’ve got no complaints at all.