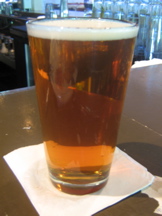 I’m soloing it again, but Rich will definitely be back on the show soon. On this installment I pop open a Blue Point Hoptical Illusion. It’s a fairly hoppy IPA.

IPA stands for India Pale Ale. It’s a style of beer invented in England, but has been adopted by Americans and turned into a completely new beer. The English version was a Pale Ale that was more alcoholic and more highly hopped. The hops act as a preservative to keep the beer fresher tasting over the long voyage from England to India (hence the name). The American version (I should say versions since there’s a West Coast style that is even hoppier than the standard American IPA) is hoppier and makes use of American hops. The West Coast variety has a marked citrus character from the Pacific Northwest-grown hops.

I tried an experiment and poured the Hoptical Illusion right down the center of the glass to form an enormous head. (I used an oversized glass to avoid spillage.) The idea was to release the aroma and the carbon dioxide. Why?  Well, I wanted a flatter beer. The citrus-like bitterness of the IPA is already tongue scrubbing enough without the bubbliness from the carbonation.

I’ve been pouring down the center of the glass lately just to get this flattening effect and to increase the head. This led to a dispute with a friend of mine over the correct way to pour a beer. As far as I’m concerned you can pour it how you want as long as the beer goes into the glass. But some people have strong opinions on this topic.  How do you pour your beer? (Over ice cream?)

For the philosophically inclined I decided to play a segment about the philosophy of taste and of flavor perception. Then I finish up the show with an on the spot recording at a pretty cool beer bar I visited while in Houston, Texas.

I’ll be back next week with another surprise episode.